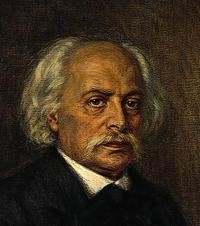 At the age of twenty-seven, Karl Goldmark decided that it was time for him to make his mark as a composer, and so he arranged a concert devoted entirely to his own works.

His colleagues in the Carl Theater in Vienna promised in writing to donate their services. Goldmark recruited an ensemble of instrumentalists and singers and lined up a soloist to sing a ballad. When he had gotten commitments from several singers with the Court Opera Company, he sent out notices advertising the concert and the names of the performers.

Then a setback came in the form of professional jealousy. Seeing the names of the other participants, one by one, the singers withdrew from the concert until just a single soloist remained. Goldmark spent his meager savings on posters, tickets, and renting the hall. He had planned just one rehearsal–to take place the day before the concert, but when he stepped up to conduct it, he found that fewer than half of the orchestra members had bothered to show up, forcing him to cancel the concert and forfeit his funds.

Luckily for Goldmark, he found a patron to cover the cost of a second attempt. The rehearsal was well attended, and the concert took place on March 12, 1858. Goldmark recalled later that the audience reception was friendly, the reviews mixed, and the concert not exactly earth-shattering, although he did benefit from some much needed publicity.

Many years later, Goldmark encountered one of the singers, who mentioned that he still had a manuscript of Goldmark’s ballad from the concert. Without success, Goldmark begged him for it then pleaded at least to have a copy, which was forthcoming, but with Goldmark’s solemn ending replaced by a cheerful yodel. Karl Goldmark never bothered to publish the rest of the works from that first concert because he came to recognize their complete lack of originality.