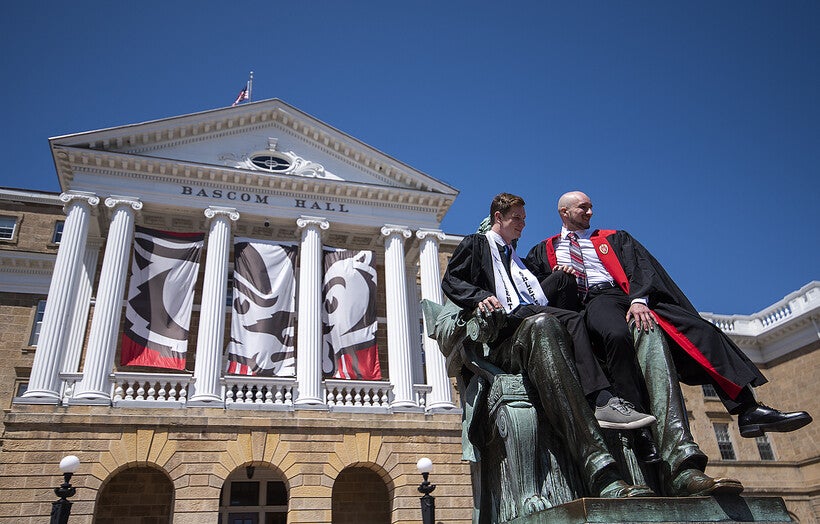 Sam Lopez, left, and Daniel Jablonski, right, take graduation photos as their semester nears its end Saturday, May 7, 2022, at the University of Wisconsin-Madison. The two have already lined up jobs in their respective fields of education and atmospheric and oceanic science. Angela Major/WPR

The first cohort of students to receive four years of free tuition through the University of Wisconsin-Madison's Bucky's Tuition Promise received their diplomas Saturday. The donor-funded initiative has grown since its inception in 2018 to include thousands of recipients at the state's flagship university.

Neurobiology major Tikiri Bandara crossed the stage at UW-Madison's Camp Randall Stadium to receive his bachelor's degree this weekend. He told Wisconsin Public Radio among the audience was his mother, who flew more than 20 hours from Sri Lanka to witness it first hand.

Bandara said he always planned on going to college and was comparing financial aid offers from universities. When UW-Madison notified him that he qualified for four years of free tuition and student fees he likened it to a movie line from "The Godfather" and said, "They made an offer that I couldn't refuse."

"It was one of those factors that you didn't really want to think about," said Bandara of the rising cost of going to college. "But, you know, it was the elephant in the room."

During his four years at UW-Madison, Bandara said he learned about the Wisconsin Idea, which aims to use university resources and research to benefit all state residents.

Outside of academics, Bandara said he was able to put the Wisconsin Idea into practice by working as a dispatcher for UW Health's Med Flight helicopter ambulance service.

And Bandara said he learned a lot about himself too.

"Things that seem impossible are not actually impossible," said Bandara. "Never take no for an answer in terms of the pursuit of what you like."

In February 2018, UW-Madison announced it would use private donations to offer four years of tuition-free college to students from families with adjusted gross incomes of $56,000 or less. Bandara was among 796 students enrolled under Bucky's Tuition Promise that year.

Since then, income requirements have been raised to include students from families with incomes of $60,000 or less. The number of students participating has also increased. Helen Faith, UW-Madison director of the Office of Student Financial Aid, told WPR, 961 students were enrolled through the tuition promise in fall 2021.

She said the impetus behind the tuition promise was to ensure a UW-Madison education was affordable to families at or below Wisconsin's median income.

The idea was supported by Democratic Gov. Tony Evers, who included it in his 2021-2023 state budget proposal. Republican members of Wisconsin's Joint Finance Committee rejected the plan.

Faith, of UW-Madison, said the university is fortunate to have a long list of generous donors who continue to support the Bucky's Tuition Promise and said she would like to see it replicated in Wisconsin.

"I certainly encourage the development of similar programs," said Faith. "And it really feels like a great honor to us that this would be used as a model for other institutions and for the whole state."