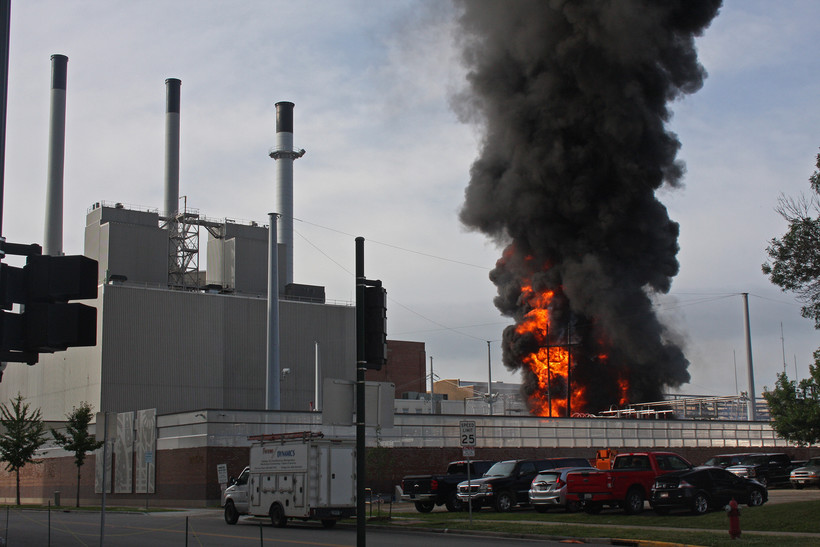 Fires at two Madison Gas and Electric substations knocked out power to more than 11,000 customers on Friday, July 19, 2019. Jenny Peek/WPR 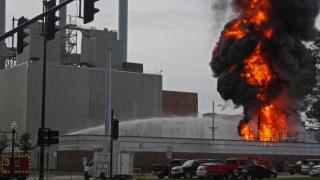 Fires at two Madison Gas and Electric substations knocked out power to thousands of customers Friday, a day when sweltering heat and humidity were already a concern. At its height, more than 13,000 customers were without power.

An explosion and fire at the utility's sprawling campus on the city's east side sent a plume of thick, black smoke over the city at about 7:40 a.m. Friday.

A second fire Friday morning at the East Campus substation near the University of Wisconsin-Madison campus also sent a cloud of black smoke into the air and caused police to evacuate Ogg and Smith halls, and the UW Safety Building.

The Madison Fire Department reported the fire at the Blount Street substation located between North Livingston and Blount streets at the utility's main campus had been put out at 9 a.m. The department sent about 40 firefighters to the scene, said Madison Fire Chief Steven Davis.

Davis said the facility was still energized when firefighters first arrived at the scene.

"It took us about 15 to 20 minutes working with their folks at MGE to de-energize that system and we were able to go in and put the fire out that was actually burning within a few minutes," Davis said Friday during a joint press conference with MGE, the Madison Fire and Police departments, and the city of Madison, at around 11:15 a.m.

As of 1:30 p.m., there were no reported injuries, but residents without access to air conditioning should be on alert.

Madison Mayor Satya Rhodes-Conway urged residents to be smart and safe in the heat and said city officials were checking on vulnerable populations.

"This is our priority in the hours going forward," said Rhodes-Conway. "We're counting on MGE to get us power back as soon as they can. But if we are looking into the evening or even additional days, our top priority at the city is going to be making sure that vulnerable populations are taken care of."

Rhodes-Conway assured people that transportation to the cooling center for those who need it would be provided.

"If the power does go out overnight ... and anybody does need to get to the Coliseum as a cooling shlether. (Madison) Metro will establish bus pickup spots and a shceulde and post that information on the city's website, metro's website and on city social media," she said.

Gov. Tony Evers declared a state of emergency on Friday afternoon for the city of Madison and Dane County.

"We are grateful that no one has been injured as a result of the explosion and fires this morning, and I want to thank emergency personnel who responded quickly to contain the situation," Evers wrote. "With the power outages and the extreme heat, I have directed all state agencies to provide assistance and authorized Maj. Gen. Don Dunbar, Wisconsin’s adjutant general, to activate the National Guard to assist local authorities if needed. Keeping folks safe remains our top priority as we continue to manage and respond to this situation."

While those affected by power outages was down to five at 1:21 p.m., the number continued to fluctuate, bouncing back up to more than 1,000 minutes later, according to MGE. 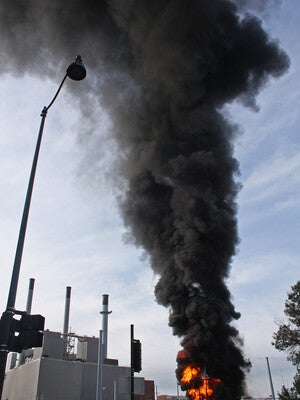 Thick, black smoke blanketed Madison's east side after an explosion at Madison Gas and Electric at about 7:40 a.m. Friday, July 19, 2019. Jenny Peek/WPR

As the fire at the MGE substation on the east side raged, dark smoke could be seen over the city's downtown. MGE spokesman Steve Schultz said the fire was across the street from the Blount generating plant. No one was at the substation at the time of the explosion, but people were working in nearby buildings, according to MGE.

"First off, there were no injuries," Jeff Keebler, chairman, president and CEO of MGE, said. "We did not have employees in the substation, this is right by our general campus so we have employees around there working in different areas. I do not believe anyone was assigned to be working in that facility at the time of the incident, and I don't think anyone was in there."

While roads have been reopened and some power has been restored, many street lights remain out in the city's downtown, according to Madison Police.

During the press conference, reporters were given a map of the power outages across Madison's Isthmus. MGE spokeswoman Kaya Freiman said there is no timetable for restoration of service for those without power.

A campus email alert at 8:09 a.m. Friday from the UW-Madison Police Department alerted people of another fire at a MGE substation south of Ogg Hall. Another alert at 8:43 a.m. told people to evacuate immediate and stay away from the area. A number of campus buildings were evacuated, said UW-Madison spokeswoman Meredith McGlone.

According to UW police, the fire was out and all evacuations and road closures were lifted by about 9 a.m.

"Fortunately the fire was pretty quickly brought under control, not aware of any injuries, it does appear that the cause was unintentional, likely related to the broader issues that MGE is experiencing," McGlone said. "So we've been able to let folks back into the buildings."

One of the buildings that was affected was Ogg Hall, a dorm on campus where a program called "Grandparents University" was taking place. Children and grandparents who were staying in the dorm were evacuated, McGlone said. 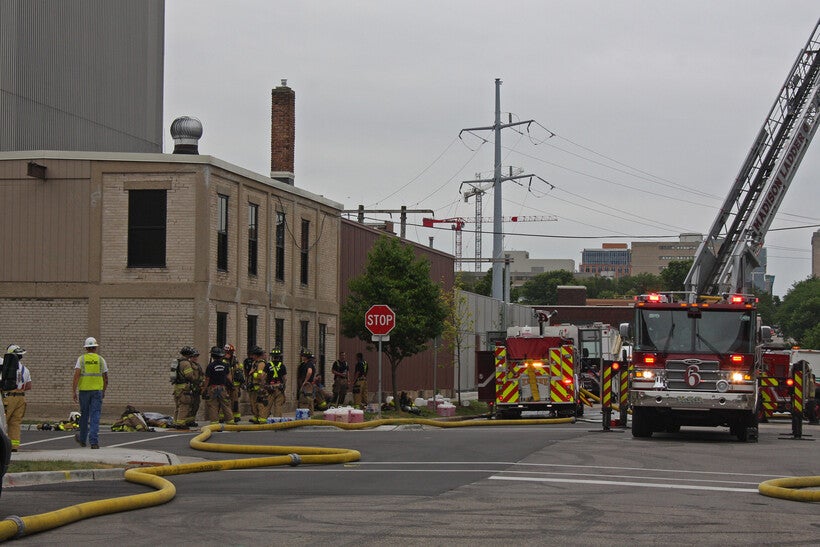 Madison firefighters and Madison Gas and Electric staff after a fire was put out at the utilities substation on North Livingston Street on Friday, July 19, 2019. Jenny Peek/WPR

At a 4 p.m. press conference, officials from MGE and American Transmission Co. — a joint owner of the substation — said investigations into the cause of the fires were ongoing. Paul Roehr, vice president of system operations at ATC said they do not think heat was an issue, instead he pointed to the problem being mechanical.

"We’re dealing with mechanical type issues so it is possible these types things happen and they are very rare in nature," Roehr said. "With any piece of mechanic equipment they are subject to failures at times."

Roehr did confirm that the fires at both substations were connected. "Those two substations are electrically connected and based on the data that we have through the day, we are confident that the issues at the second substation are largely indicated of being a result of the extensive damage at the first site."

ATC issued a news release early Friday morning that said an explosion and fire occurred at about 7:30 a.m. at the joint ATC and MGE substation located between North Livingston and Blount streets. This caused a transformer to fail. Officials said in the statement that the cause of the second fire at the East Campus substation isn't yet known.

"We believe there was an explosion at the downtown substation, we don't know whether the fire caused the explosion or if the explosion caused the fire, and that's what we're assessing now," Keebler said earlier Friday.

"We did use some firefighting foam, because there was a lot of oil, this equipment had some oil bath to it for cooling, and so the fire fight went well, we isolated fairly well and reduced the damage to the substation," Davis said Friday morning. "Our investigators are on scene still working with MGE to kind of figure out what might have caused this and we'll know more I'm sure in the coming days. As you can imagine, this is kind of a large event for MGE and ACT to deal with, so they've got a lot of folks working in a lot of different areas."

As for next steps Roehr said ATC and MGE will continue to work on cleaning up site, further strengthening the system, working with crews on mitigation measures, as well as doing a detailed assessment of what caused the mechanical equipment to fail. 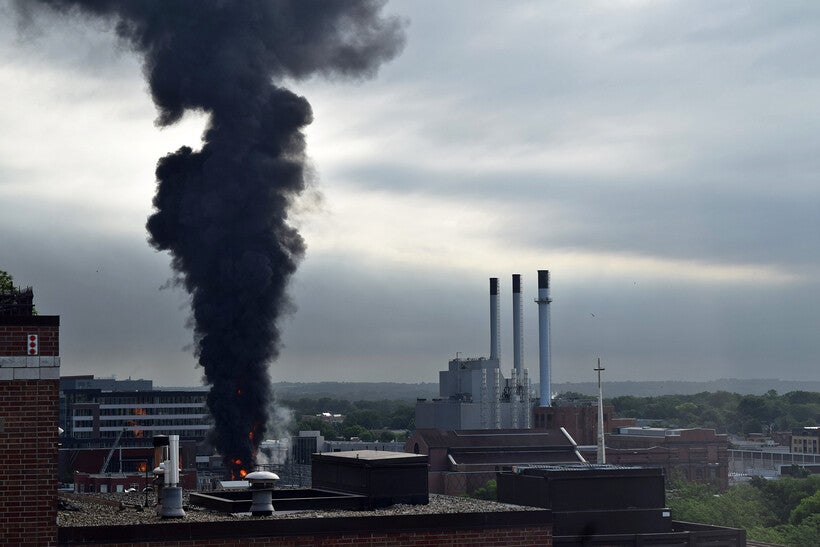 An explosion and fire at Madison Gas and Electric's power center sent a plume of thick, black smoke over Madison's east side at about 7:40 a.m. Friday, July 19, 2019. Bridgit Bowden/WPR

Madison city officials said in a news release Friday morning that because of the fire and power outages, all establishments regulated by Public Health Madison & Dane County without backup generators need to close until power is restored. This includes restaurants, swimming pools, tattoo and body piercing, hotels and retail food stores. They said the outage, along with the "excessive heat warning and unknown duration of this event; necessitate that these measures are taken to protect the public health."

The fires and power outages come as many are looking for relief from sweltering summer temperatures. The National Weather Service issued an excessive heat warning for the area Friday when temperatures were expected to be in the 90s and come with high humidity.