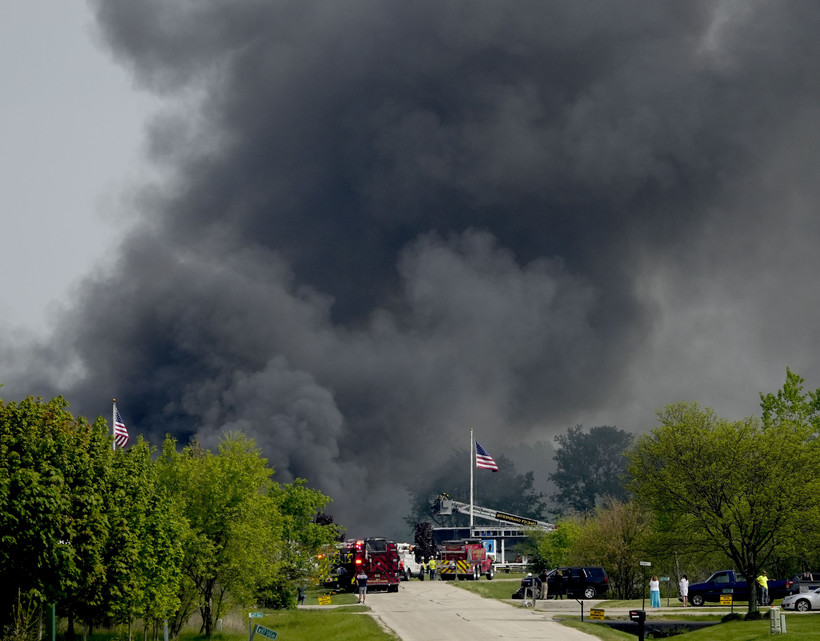 A large fire continues to burn at a marine construction company in southeast Wisconsin after a fire brokeout and explosion occurred Thursday morning.

The Eagle and Kettle Moraine Fire District received a call at 7:44 a.m. reporting a fire and possible explosion at Summerset Marine Construction in Eagle, about 35 miles southwest of Milwaukee.

Area agencies are helping battle the blaze at the facility that makes piers and docks. The cause of the fire and explosion, which happened nearly simultaneously, is still under investigation, Western Lakes Fire District Assistant Fire Chief Matt Haerter said during a press conference Thursday afternoon.

The community is currently not in any danger.

Still, Haerter asked people to avoid any area within a 1-mile radius of the explosion, and for those within 1-mile of the company to shelter in place.

"Be in your home, have your windows shut and do not have your air-conditioning running," he said. "There is no danger to the community, there is no hazardous materials here, it’s just that it’s a smoke issue."

Firefighters have been unable to go inside the building because of its structural integrity and a stock of diesel fuel and liquid petroleum on site.

"This has been a defensive fire the entire fire attack, which means that the firefighters were never able to go inside of the building," Haerter said. "There was significant structural collapse prior to firefighter arrival due to what occurred inside."

Haerter cautioned that additional explosions may occur, and are expected and will be under control.

Six people were injured in the explosion, including three employees and three firefighters, Haerter said. One employee and one firefighter were taken to a nearby hospital, with the other four people injured treated on site.

Owner Larry Chapman said he was on his way to Summerset Marine this morning when the explosion occurred. He said all 24 employees who were in the building at the time of explosion acted quickly and have been accounted for.

"They all got out and one of our employees was very heroic and dragged two (other employees) out right away — very thankful for that," Chapman said.

Chapman said the company plans to use their Madison facility, as well as a temporary local space to fulfill contracts and jobs.

"We’ll get through it. It’s only stuff. We’re just glad everybody’s healthy and happy. Not happy but, you know, alive," Chapman said. 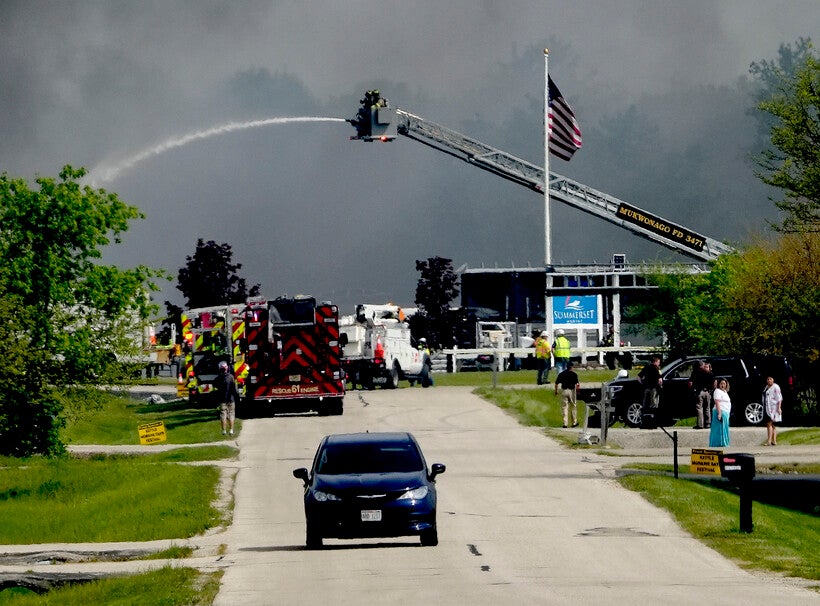 Emergency crews work to extinguish a fire at Summerset Marine Construction in Eagle, Wis., on Thursday, May 19, 2022. Six people were hurt, including three firefighters, when an explosion and fire rocked the marine construction company in southeast Wisconsin on Thursday. Mike De Sisti/Milwaukee Journal-Sentinel via AP Photo

Everyone in the building evacuated while firefighters were on the way. As a precaution, the surrounding industrial park and Eagle Elementary School were immediately evacuated, including about 275 students. Palmyra-Eagle High School is being used as a relocation point.

Officials say the fire is requiring large amounts of water to extinguish it, with water coming from Milwaukee, Kenosha and Washington counties.

Summerset Marine Construction makes piers and docks, with a 24,000-square-foot facility in Eagle that includes a showroom, office, factory and warehouse, according to The Associated Press.