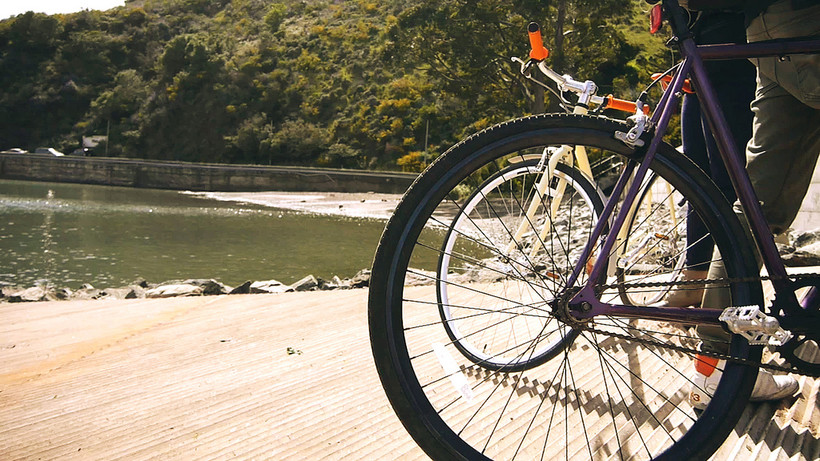 The Rev. Laura Everett Tapped Into The Spirituality Of Bicycling Following Her Car Breaking Down
By J. Carlisle Larsen
Share:

Spirituality is different for all people. Some people find solace in a house of worship or scripture. Others may find deeper meaning in meditation and in nature. And some people may keep a distance from spirituality altogether but find joy and purpose through friends and family.

Regardless of how an individual finds comfort in the world, the common thread is that we all are able to seek it out in our own way.

For the Rev. Laura Everett, a deeper spirituality came from what some might see as an unlikely source: riding her bicycle.

Everett is a minister in the United Church of Christ and the author of, "Holy Spokes: The Search for Urban Spirituality on Two Wheels." Her path to spirituality through bicycling came at a somewhat tricky financial time.

"I was driving a beat-up old car down (Interstate) 93-South just outside of Boston and it finally died," Everett said. "I was fresh out of seminary, too economically strapped to replace it."

It was during this time that she was attending a Bible study with other women who were wondering how they could be more faithful with their money, Everett said. The members of the study were questioning how they could spend less but give more. And it was there the women she was studying with encouraged her to learn how to build and ride a bike.

However, biking in urban Boston did not come naturally to Everett.

"I grew up in suburban New Jersey," she said. "For me, a bicycle was a kid's toy. It was entertainment or something that you did for pleasure or for exercise. I didn't really think of (bikes) as a vehicle."

Everett realized after a few years cycling that her whole relationship with her bike, her city and herself had shifted in profound ways. She found she was interacting differently with her neighbors because she was moving more slowly and openly in the world.

She began to trust her legs and her body to get her to where she needed to go. And she was finally able to see more of her city once she was able to slow down.

"Whether on a subway line or in a car, you're enclosed in some sort of way," Everett said. "And the trip just becomes the way to get in between two places, but on a bicycle, the ride is part of the journey."

And that journey has led her to meet fellow cyclists along the same path, many of whom come from all walks of life and are connected through cycling.

"And so you start to see the same people every day at the same intersections, and I feel like we got to know one another a little bit," Everett said.

She also advocates for cyclists to visit different areas of their community in order to become better neighbors. She said this act of "border crossing" allows people to fully commit to loving their neighbor regardless of where that neighbor lives.

While Everett finds joy in communing with her fellow cyclists, there are times when tragedy occurs. According to the National Highway Traffic Safety Administration, nearly 730 bicyclists were killed and accounted for 2 percent of all crash-related injuries in 2014.

For Everett, she is constantly aware of the danger surrounding bicyclists when they travel.

"When a cyclist is killed, there's a tradition in the cycling community of installing a 'Ghost Bike,' a white bicycle placed at the scene of the crash," she said. "So that the person who has died might be made visible because cyclists really have an embodied sense of their vulnerability as transit users."

Everett said while the cycling community meets during sad times, they also meet during happier occasions, such as the annual "Blessing of the Bikes," which she helps lead in Boston.

Overall, Everett said all commuters, regardless of their mode of transit, should learn to slow down and be aware of their fellow travelers.

"I really hope that pedestrians, cyclists and drivers remember that we're all just humans trying to make it home alive," Everett said.

Despite the potential dangers on the road, Everett still advocates for the numerous physical and spiritual benefits of cycling. And for those who are still a little nervous, she recommends starting with short trips to get a feel for it, and making sure that your bike is in working order and that you always use a helmet.

"Notice the people in the world around you," Everett she said. "Find the strength in your own legs and the wind in your face. I hope you have a joyful time on your bike."