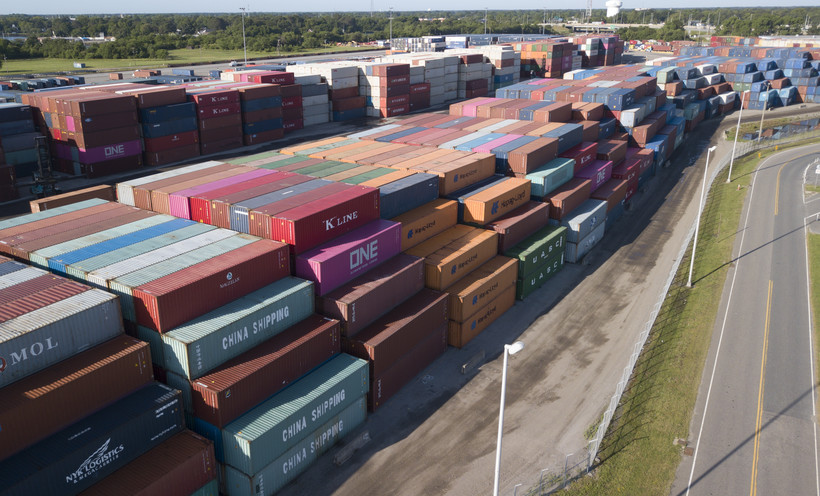 China Shipping Company and other containers are stacked at the Virginia International's terminal in Portsmouth, Va., Friday, May 10, 2019. President Donald Trump's latest tariff hike on Chinese goods took effect and Beijing said it would retaliate, escalating a battle over China's technology ambitions and other trade tensions. Steve Helber/AP Photo

Federal Reserve: Wisconsin Exports Down In Beginning Of 2019

The Federal Reserve Bank of Minneapolis found exports from Wisconsin have declined since the United States began exchanging retaliatory tariffs with China, Canada and other countries.

Using data from the U.S. Department of Commerce, the Federal Reserve found Wisconsin exports were 4 percent lower in the first four months of 2019 compared to the same period last year. The report found aircraft parts saw the largest decline in Wisconsin, but it also noted the data doesn't always capture agricultural products and other goods that travel within the U.S. before being exported.

Taggert Brooks, economics professor at the University of Wisconsin-La Crosse, said the change in exports is significant.

"Our economy is growing and while there has been a slow down across the world, there are still plenty of countries that are growing and so to have a decline in exports is really unheard of," Brooks said.

Brooks said uncertainty about foreign trade has disrupted Wisconsin producers’ trade relationships, whether or not increased tariffs have been applied to their products.

The Federal Reserve report found exports to China were 25 percent lower this year, with goods targeted by tariffs declining 18 percent and untargeted goods down 63 percent.

Exports to Canada and the European Union were each down 4 percent, while exports to Mexico increased by 4 percent.

Some Wisconsin business leaders say the decline in exports is worth it to improve markets long term.

"You’ve got to try and flex the muscle and use the leverage that you have as the world’s largest economy in order to open up markets for the future — that's the argument," said Kurt Bauer, CEO of Wisconsin Manufacturers and Commerce. "We’ll have to see whether or not it works. Frankly, I’m concerned about it personally. I think that it's a risky strategy but I also have to concede that what we've been doing has not been working."

Bauer said American producers haven’t had an even playing field when exporting to China, citing problems with theft of intellectual property and currency manipulation. With much of the world’s economic growth happening in Asia, Bauer said some Wisconsin business leaders feel the U.S. needs to take a stand with China now to access future markets.

"We’re all hoping that we can resolve this and truly develop a free, fair reciprocal trade relationship with China going forward and put this behind us," Bauer said.

But Brooks said business leaders’ support for the trade strategy likely has more to do with politics than economics.

"This political environment is such that people will go to great lengths to justify the actions that previously they would not have," Brooks said. "(It has) more to do with ‘My team is doing this, and I want my team to win.' This is not a basketball game or a football game, this is economics; and we benefit from more efficient exchange of goods and taxes and tariffs don't achieve that."

Brooks said it’s uncertain if exports will return to previous levels if the remaining tariffs on U.S. products are removed.