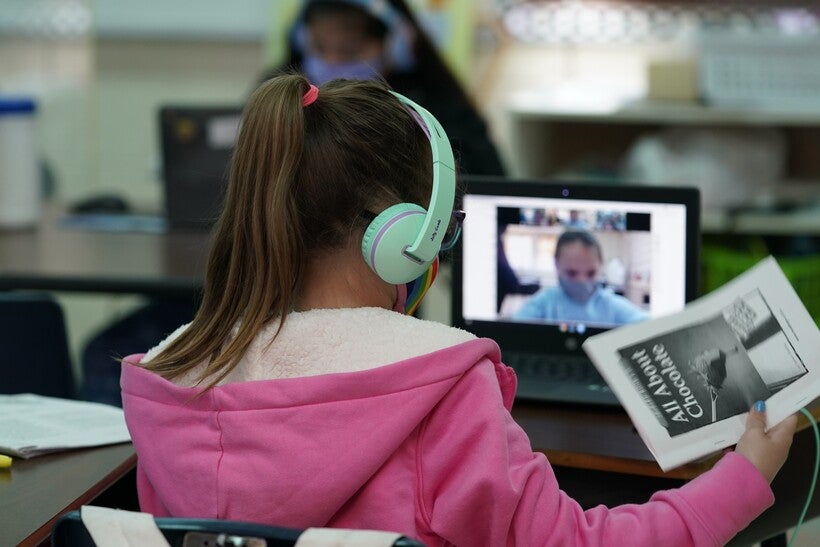 Students at Driggers Elementary School attend a class in-person as they interact with classmates virtually, Monday, Feb. 8, 2021, in San Antonio. After seeing two academic years thrown off course by the pandemic, school leaders around the country are planning for the possibility of more distance learning next fall at the start of yet another school year. Eric Gay/AP Photo

Federal Relief Bill Means An Estimated $1.4B For Wisconsin Schools

School Districts Can Allocate Funding Through 2024
By Madeline Fox
Share:

When Tom Owens takes the Stevens Point school district budget to the school board every year, he said, he prefaces it with, "Here's our budget, it's wrong."

Owens, the district's director of business services, said in an ordinary year, school district budgets are a best guess for what the next year will look like. Any number of factors in an ordinary school year can — and do — shift the amount of money a district needs to spend, or how much money it takes in.

"With the COVID situation, our budgets for the last two years have been — unpredictable is an understatement," said Owens.

Stevens Point, like most school districts, has seen its cleaning costs increase because of the pandemic, and spent more money on technology to help facilitate virtual learning last spring and during this school year. The district has been offering in-person learning, though students can opt in to virtual learning, and the whole district went virtual for December.

Although the precise allocations to each state are still being finalized, the Wisconsin Department of Public Instruction (DPI) estimates it will get about $1.4 billion to distribute to K-12 schools based on their share of students in poverty. This will be school districts' third round of Elementary and Secondary School Education Relief, or ESSER, funds, which are directly administered by DPI. The federal bill allows DPI to hold on to a percentage of the federal funds, and requires 5 percent be spent on learning loss and 1 percent be spent on each summer school and afterschool programs.

DPI expects this round of funding to be double what school districts received under "ESSER II," the relief funds allocated in December. Owens' district, for example, was allocated about $700,000 from the first coronavirus relief package in April, and about $2.7 million from the December relief package, which would put its next allocation at an estimated $5 million.

Many districts put the earlier federal funding toward immediate expenses like cleaning supplies and custodial overtime pay, Chromebooks and internet hotspots, and other rapid-response needs during the spring closure and return to in-person or virtual classes in the fall. Owens said the newest round of federal money, which districts can allocate through October 2024, will allow his district to look at some of the underlying concerns that have come to light because of the pandemic — like ventilation.

"We're probably going to have to do some more looking at our facilities with respect to indoor air quality, our filtration system," he said. "That takes time to evaluate and assess what might be the best approach to take, then there's a process of bidding, then there's the construction or remodeling or whatever the case may be."

For those kinds of long-term changes, Owens said, a three-and-a-half year timeline to spend the federal funds makes sense.

The bill also set aside $2.75 billion nationally for governors to distribute to private schools, $40 billion for higher education and $3 billion for the Individuals with Disabilities Act.

Education funding through the various COVID-19 relief packages has blown previous federal allocations to Wisconsin schools out of the water, and surpasses federal spending on schools in response to the Great Recession.

"Historically, the federal government has played a fairly minimal role in funding for Wisconsin schools — generally it's been on the order of somewhere between 5 and 6 percent of the total funding for schools in Wisconsin," said Dan Rossmiller, director of government relations for the Wisconsin Education of School Boards. "It's going to be a much greater role going forward, and that influx of federal money is going to change the conversation, somewhat, in ways that I'm not sure we've been able to sort out yet."

Wisconsin lawmakers are hashing out the next two years of state funding for education as they work on the biennial budget. The bulk of Wisconsin's education funding comes from the state and from local property taxes.

"(The federal funding) has created some unique problems in that it's not flowing evenly to all districts," Rossmiller said. "The kinds of perceived equity issues that raises are something else that will affect the conversation."

Because the federal coronavirus relief money is allocated based on the Title I formula, which allocates funding based on the low-income student population, some school districts are getting less funding than others, even if they have a similar number of students. The bill has a "maintenance of equity" provision that restricts states from cutting funds disproportionately from high-poverty schools because they received more federal funding, but Rossmiller said it could still play into lawmakers' thinking as they hammer out school funding.