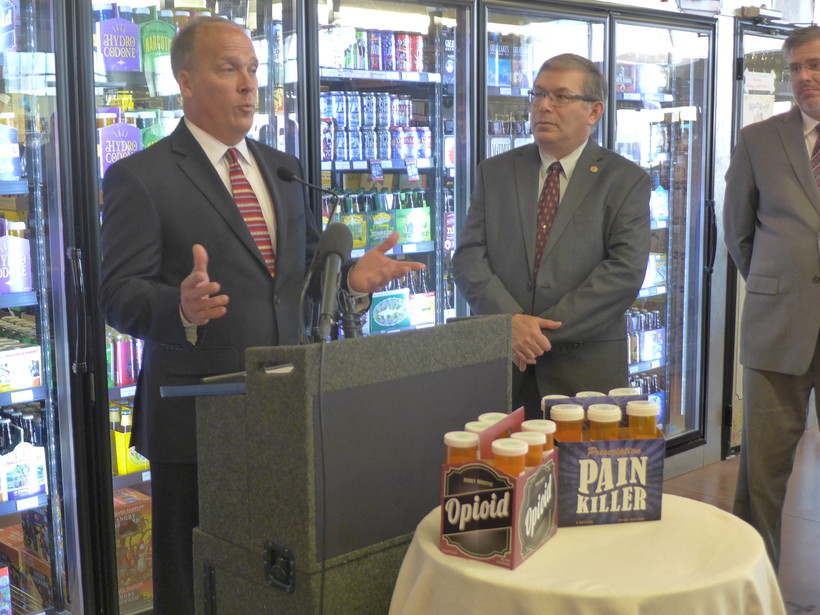 Wisconsin’s opioid epidemic is driving an increase in motorists who are impaired behind the wheel.

State Department of Transportation officials estimate about a full quarter of people pulled over for impaired driving are on drugs, and while alcohol remains the main culprit, there’s been a dramatic increase in drug-related traffic crashes.

"In fact alcohol related deaths are down 38 percent and alcohol-related injuries are down 50 percent over the last 10 years," he said. "So working together with all of our local partners and the traffic safety community we’ve had a lot of success."

Wednesday, state justice and transportation officials unveiled a public service announcement at a Madison liquor store to try and get across the point that drugged driving is just as illegal and dangerous as drunk driving. Standing in front of a fridge stocked six-packs filled with pill bottles instead of beers, Wisconsin Attorney General Brad Schimel said the radio and TV messages are part of the state Department of Justice's Dose of Reality campaign to combat prescription drug abuse.

"We launched our Dose of Reality awareness campaign on Wisconsin’s opioid epidemic about 15 months ago," Schimel said. "And we’re going after the myths. And one of the myths we’re trying to break down is the myth that because a doctor prescribes painkillers they can’t be dangerous, they can’t be addictive. And nothing if further from the truth."

Schimel said law enforcement are seeing "more and more arrests ... where the person blows into a preliminary breath test device and he comes up zero. However they’re clearly impaired and we find its drugs we’re under the influence of. Drugged driving has become a very serious problem."

David Pabst, director of the DOT’s Bureau of Transportation Safety, said Wisconsin is training officers how to better detect drugged driving. He said the state has 235 drug recognition experts, putting it in the top five per capita in the United States for such positions.