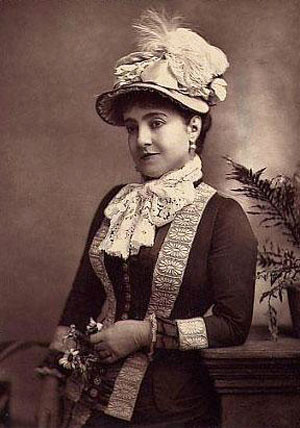 Adelina Patti was one of the most celebrated sopranos in the history of music, but that didn’t put her above the barbs thrown by New York Evening Post critic Henry T. Finck.

Finck had several misgivings about Patti, most of them having little to do with her singing, which he described as “so glorious, so incomparable, that while under the spell of her vocal art, the listeners forgot everything else and simply luxuriated in ecstatic bliss.”

One of his objections to Patti was her apparent arrogance. It was said that during a rehearsal of a Handel oratorio, she was embellishing the music to show off the beauty and agility of her voice and insisted on doing it her way because she was the prima donna, to which conductor Theodore Thomas replied, “Excuse me, madam, but here I am prima donna.”

Finck asserted that Rossini barely recognized one of his own arias when Patti sang it.

Then there was the matter of money. She required $5,000 up front in gold for a performance, so much that any production involving her had to economize in all other areas, making an all-round solid performance impossible. He thought that, at ten dollars a seat, her ticket prices were too high, since even the Berlin Royal Opera House charged as little as a dollar.

“One of the funny things about Patti,” he added, “was that each of her visits to America was announced as her farewell.” In a review after one such concert, he gave himself over to sarcasm, writing:

It will also be recorded that old men who had as youths heard Madame Patti sing...when her farewell had just been invented, wept with joy on realizing that though she was still “an exile from home” at $4,000 an evening and had not yet succeeded in coming all the way through the rye, she was as delicious to the senses as the last rose of summer, which had become her special property.”