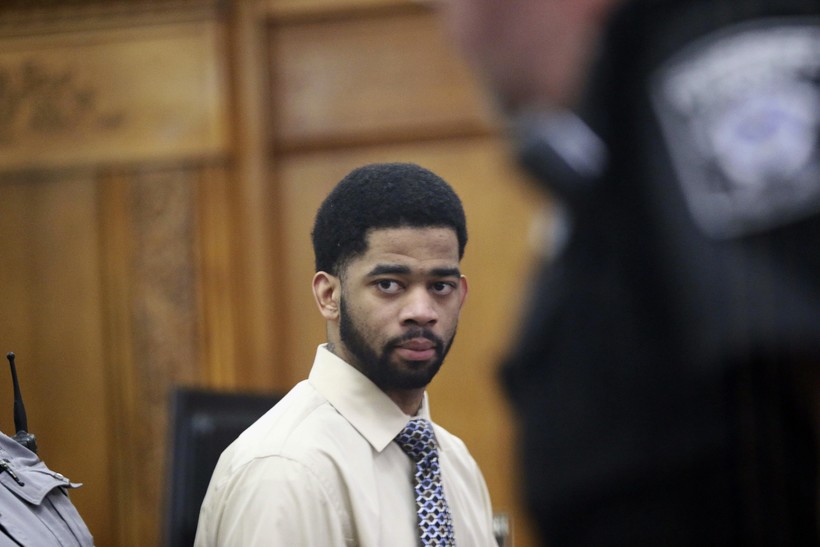 In a request filled with tears, the sister of an unarmed black man killed by a former Milwaukee police officer called for the community to come together and be peaceful after a not-guilty verdict.

"Try as hard as you can to be peaceful and form unity with each other, period. Black or white, because we all bleed the same, we all hurt the same, and it don't feel good to lose anybody," said Sherele Smith, standing next to her father, Patrick Smith, outside the Milwaukee County Courthouse.

Heaggan-B﻿rown, who is also black, was charged in October with first-degree reckless homicide after shooting and killing 23-year-old Sylville in August in the Sherman Park neighborhood on Milwaukee’s north side.

The trial for the 25-year-old officer began on June 12. The sequestered jury began deliberations at 11:30 a.m. Tuesday after closing arguments, and the news media were told at about 1:45 p.m. Wednesday that a verdict had been reached.

After the verdict was read at around 2:30 p.m. to a packed, tense courtroom, cries and yelling could be heard.

A woman, one of the handful there supporting Heaggan-Brown, stood up and celebrated the verdict, while family members and other supporters of Smith erupted in anger, prompting court security to escort some people out of the courtroom.

Heaggan-Brown stared at the judge as the verdict was read with little reaction. Patrick Smith said there is no justice in his son's death.

"They shot my son in the arm. That was over, he was out of commission. He shot him while he was on his back. That won't be tolerated," Patrick Smith said. "We call the police somebody we're supposed to be looking up to."

The family has filed a civil suit against the former officer and the city of Milwaukee. Family attorney David Owens announced the lawsuit after the jury acquitted Heaggan-Brown. Owens said it's become clear since the shooting that Heaggan-Brown never should have been on the force, The Associated Press reported.

The jury could have found Heaggan-Brown guilty of two lesser charges of second-degree reckless homicide or homicide by negligent use of a firearm.

Milwaukee Police Chief Ed Flynn said he and the jury are on the same page.

"The jury's verdict was based on the objective evidence before it," Flynn said in a statement Wednesday. "A year ago, I told the public I’d seen nothing in the video that was a violation of the law or policy. The jury saw the same evidence and came to the same conclusion."

During the trial, Milwaukee County District Attorney John Chisholm argued Heaggan-Brown, who is also black, was not justified in using deadly force when he fired the second and fatal shot Saturday, Aug. 13, 2016.

The encounter started as a traffic stop and turned into a foot chase. Smith ran from police, carrying a gun, while the former officer was in pursuit.

Smith had thrown his gun over a fence one second before Heaggan-Brown fatally shot him.

Body-camera video showed Smith was unarmed and on the ground with his hands near his head when he was shot a second time in the chest, according to the criminal complaint.

The defense — which made its case in a single day and had one person testify — argued the prosecution wasn’t able to paint an accurate picture of what happened, despite body camera footage.

Heaggan-Brown's attorneys, Jonathan Carver and Steven Kohn, argued the officer acted in self-defense. Heaggan-Brown fired the second shot because he believed Smith was reaching for his waist, according to the complaint.

The defense also claimed a not-guilty verdict was warranted because Heaggan-Brown showed respect for Smith’s life by not firing multiple shots, and instead chose to shoot twice then check Smith’s pulse.

"He put himself between good and evil. He was confronted by an armed criminal, and we're all fortunate that we didn't lose an officer," Crivello said.

Heaggan-Brown was fired in October after he was charged with an unrelated sexual assault involving accusations that he drugged and sexually assaulted a young man the day after shooting Smith.