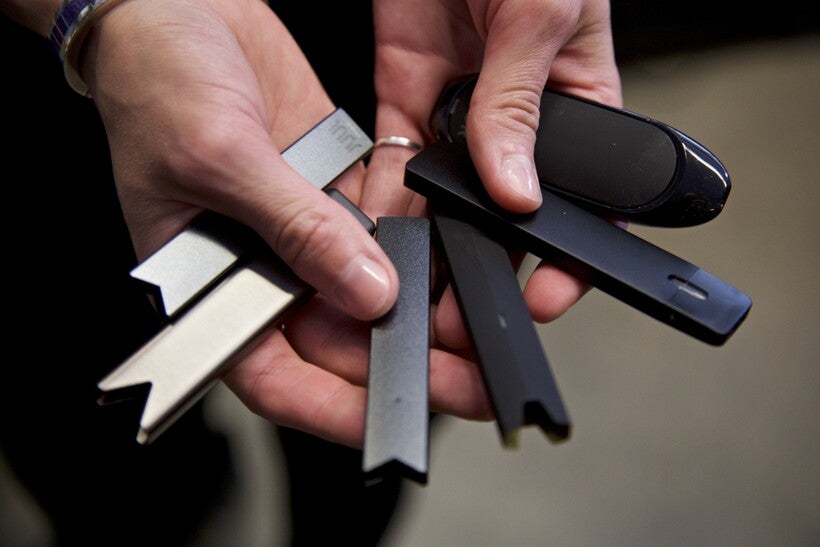 In this April 16, 2019, file photo, a researcher holds vape pens in a lab at Portland State University in in Portland, Ore. Oregon's public health physician said Wednesday, Sept. 4, 2019, that a person who contracted a severe respiratory illness and died after using an e-cigarette had purchased a vaping device containing marijuana oil at a state-legal dispensary. The death is the second linked by public health officials nationwide to vaping and the first linked to an e-cigarette purchased at a dispensary. Craig Mitchelldyer/AP Photo

School officials were looking for vaping devices in a mid-January search
By Madeline Fox
Share:

The families of six female students at a northeast Wisconsin high school have hired a civil rights attorney after the girls were forced to remove their clothing to be searched for vaping cartridges.

The girls had to remove their clothes in front of the Suring School District administrator and a nurse in mid-January, according to the Green Bay Press-Gazette. Last week, the Oconto County District Attorney said he wouldn't file charges against the school because the search didn't meet the state's definition of a strip search.

That decision prompted some of the students' families to hire civil rights attorney Jeff Scott Olson to represent them against the school. Olson has previously represented Superior's city attorney in a libel case, a group of Ashland County women who alleged sexual misconduct at the Ashland County Jail, and a man who was arrested during a crackdown on protests at the state Capitol in 2014. He did not say how many of the families hired him.

"What do you think a 15-year-old girl who has to strip down to her underwear in a search in front of adults in the school administrator's office is going to feel like?" Olson said. "These are the most intrusive searches of public school students in Wisconsin that I've had any involvement with."

Olson said he has filed a notice of circumstances of claim to the school, but has not heard back. He said the families he's representing want to make sure the students at Suring don't have to worry about having to strip to their underwear for a search again, and want this case to serve as a teaching moment so it doesn't happen to students elsewhere in Wisconsin. They'll also be seeking monetary damages.

The school district did not respond to WPR's request for comment.

According to the district attorney's statement, the girls were asked to undress to their underwear and bras. Two girls who said they weren't wearing underwear were allowed to keep their leggings on and the district administrator, Kelly Casper, conducted a hands-on search of the outside parts of their legs. One girl said she was asked to pull up her bra, and her breasts were exposed, though the district attorney said that was not consistent with the other five girls' experience.

Parents have brought up the incident during public comment at local school board meetings, and the school board is expected to discuss the search at its March meeting.