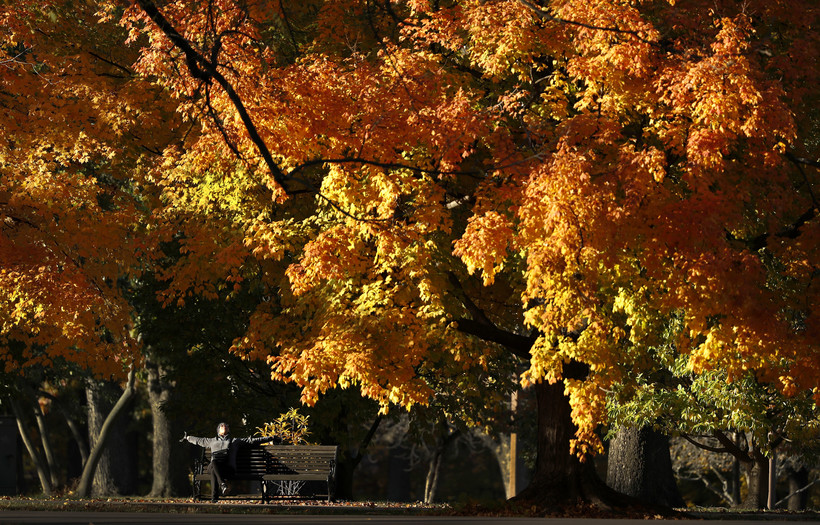 Maxine Williams stretches as she sits on a bench under trees as their leaves change color on a calm autumn day in Tower Grove Park on Wednesday, Nov. 8, 2017, in St. Louis. Jeff Roberson/AP Photo

Fall Colors Running Behind Due To Warmer Than Normal Weather

Drought Conditions May Affect Colors In Areas Of Northern And Southern Wisconsin
By Danielle Kaeding
Share:

It’s officially fall in Wisconsin, although it may not look like it just yet in some areas as fall colors are running a week or two behind due to warmer temperatures. People could have a limited window to enjoy the changing colors in parts of southern and northern Wisconsin where trees are stressed by drought conditions.

Trees in most counties across the state are at less than 20 percent of their fall colors, according to the Travel Wisconsin Fall Color Report. But, some areas of northern Wisconsin are already at or near the halfway mark, including areas of Bayfield, Iron and Forest counties.

Much of September has stayed on the warmer side with high temperatures in the 70s and 80s across Wisconsin. Warmer temperatures delay fall colors because trees need cooler temperatures to trigger a slowdown in production of chlorophyll — a pigment that gives plants their green color. That slowdown allows other colors to show through the leaves.

"Then, those colors are just going to pop right out as soon as we start getting cooler weather," said Colleen Matula, forest ecologist and silviculturist with the Wisconsin Department of Natural Resources.

While the month isn’t over yet, Milwaukee is seeing its second warmest September to date and third warmest year so far with records going back to 1871. Only 2012 and 1921 have seen warmer temperatures.

"That number could come down a little bit, but I mean it just kind of goes to show you maybe how warm it's been to kind of start the season so far," said Chris Stumpf, National Weather Service meteorologist with the Sullivan office.

The average fall maximum temperature has risen three degrees across the state since 1950, according to the Nelson Institute’s Center for Climatic Research at the University of Wisconsin-Madison.

"We've been struggling to get rainfall down here, and that's, I think, definitely kind of have had an impact as we start to see the changing of the leaves," said Stumpf.

In northwestern Wisconsin, temperatures have been one to three degrees above normal for the month so far. The city of Ashland has seen its ninth warmest year on record, said Dean Melde, a National Weather Service meteorologist in Duluth.

The area is also seeing abnormally dry to severe drought conditions as rainfall has been three to six inches below normal for the year across areas like Douglas, Ashland, Bayfield and Iron counties.

That’s where fall colors are already at or near the halfway mark with colors likely to peak in northern Wisconsin between the last week of September and second week of October. Matula said the severe drought can cause leaves to change color earlier, or it may cause those colors to last for a shorter period of time.

"Some trees respond to drought stress by skipping the fall color change altogether and the leaves will just turn brown and fall quickly off the tree," said Matula. "We've been seeing that within some of our aspen and birch trees that we have up north."

Other species like red oaks tend to fair better, but red maples began turning red prematurely in August across northern Wisconsin. The stress on trees can also stack up during drought as they face pressures from pests and disease.

Despite that, Matula expects brilliant colors in areas like Rib Mountain in central Wisconsin as long as temperatures cool off at night and barring any rain or wind storms that bring down leaves. The National Weather Service expects northern Wisconsin to remain drier than normal for the remainder of the month into October.

Colors are expected to peak in southern Wisconsin around the end of next month.