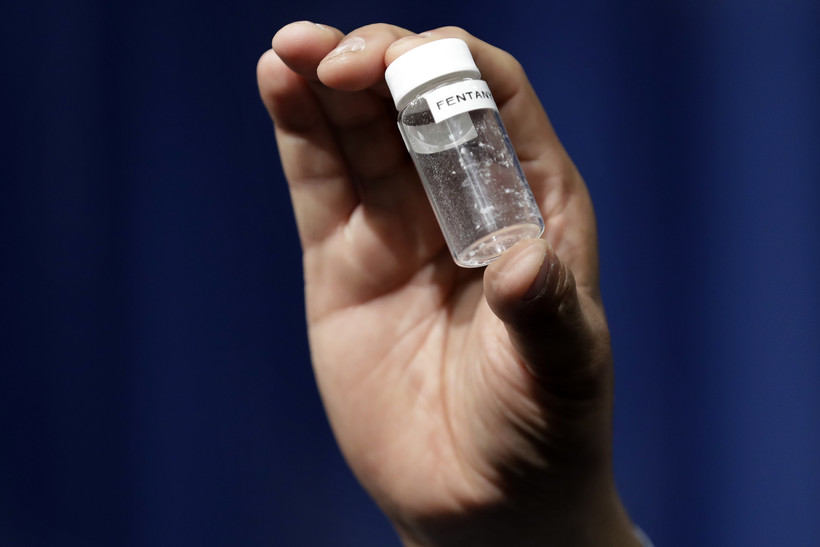 A reporter holds a vial with an example of the amount of fentanyl that can be deadly after a news conference about deaths from fentanyl exposure, at DEA Headquarters in Arlington Va. Jacquelyn Martin/ AP Photo

Counterfeit pills seized in Wisconsin and other states prompt public alert by US Drug Enforcement Agency
By Shamane Mills
Share:

The ways in which illegal drugs are sold and what’s available has changed over the years, prompting federal and state law enforcement to continually shift focus.

Lt. Matthew Ronk, who directs the Brown County Drug Task Force, said 15 years ago, cocaine and crack cocaine were most prevalent in the county.

"I almost wish for those problems back because the meth and heroin we’re having now is incredibly devastating to the community and families," he said on WPR's "Central Time." "It’s heartbreaking."

Some of that methamphetamine is ending up in fake prescription pills, along with fentanyl.

Fentanyl, a drug originally designed for use in hospitals, has been found in fake pain pills to such a degree the U.S. Drug Enforcement Agency issued a rare public safety alert last month, warning that these counterfeit pills had been seized in every state in "unprecedented quantities."

In 2017, 10 percent of counterfeit pills seized by the DEA contained a lethal dose of fentanyl, which can be as little as 2 milligrams, comparable to several granules of sugar. Last year, the number of fake pills marketed as Percocet, Vicodin, Adderall, Xanax and OxyContin jumped to 40 percent, according to DEA Wisconsin Assistant Special Agent in Charge John McGarry.

In the tri-state area where he works — which includes Wisconsin, Indiana and Illinois — investigators have taken in 600 pounds of fentanyl since October of last year in pill, powder and liquid form.

"That is a staggering number of potentially lethal overdoses," McGarry said.

Between 2016 and 2020, there was a 322 percent increase in the number of drug deaths involving fentanyl alone or in combination with other substances in Milwaukee County, said Amy Parry, a program manager with the Institute for Health and Equity at the Medical College of Wisconsin.

"Part of what we’re really trying to understand is whether people who are taking fentanyl, particularly in combination with other substances, are necessarily aware whether it’s present, which is part of what increases the risk," said Constance Kostelac, an assistant professor of epidemiology at the MCW who works with Parry at the Institute.

Over the past five years, Milwaukee County has seen a 59 percent in increase in drug deaths, said Parry. And like Brown County and other areas of the state, what substances are killing people has changed over the years.

Deaths from heroin alone or in combination with other substances have dropped 31 percent from 2016 to 2020 in Milwaukee County, said Parry.

There were 1,226 opioid drug overdose deaths last year in Wisconsin. More than half of all fatal overdoses involve more than one drug, according to Wisconsin Department of Health Services data.