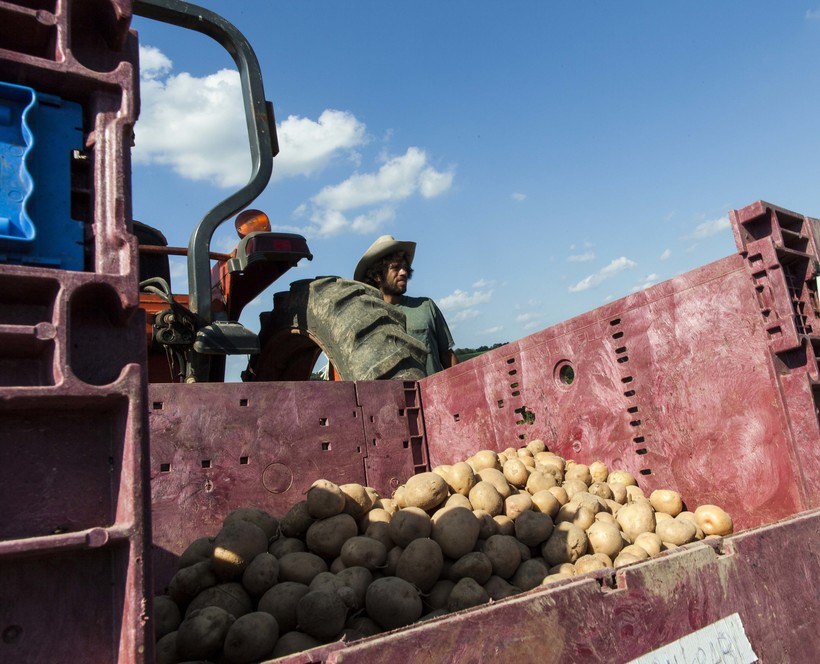 Facing 'existential threat' of climate change, potato processor asks farmers to do more for the environment

McCain Foods wants some regenerative practices on all their potato fields by 2030. Sustainable ag experts say the goal is a good first step.
By Hope Kirwan
Share:

As the effects of climate change continue to impact the potato growing season, a major food processor is asking its growers to adopt more sustainable agriculture practices.

McCain Foods announced a new plan to incorporate regenerative agriculture practices on all of their potato fields worldwide by 2030. The Canadian company manufactures frozen french fries and appetizers, and has plants in Appleton, Plover and Rice Lake.

Potato farmers will be able to pick which practices to implement on their farm from the company’s new regenerative agriculture framework. The list includes covering soils with living plants, improving crop diversity, minimizing soil disturbance and reducing the impacts of chemicals.

Jess Newman, senior director of agriculture and sustainability for McCain Foods, said asking farmers to protect the environment was a simple choice after seeing the impacts of climate change amplified in recent years.

"Climate change is an existential threat to the potato industry. When we look across all the regions in the U.S. and Canada where McCain is working directly with potato farmers ... we see an increasing incidence of crop failures," Newman said. "If we look specifically at Wisconsin, we're seeing large rains coming at strange times, cool early springtime temperatures, increasing pressure from humidity which we know drives pests and disease. It's getting more and more difficult to grow."

She said McCain Foods is now planning for crop failures in some regions every two years — a devastating trend for farmers and a challenge for the company’s supply chain to manage.

Newman said the new framework likely won't mean a major overhaul for farmers. She said many growers in Wisconsin and other states have already implemented many of the more sustainable practices.

"Keeping living cover on soils, diversifying rotation so you only see a potato crop every one in four (years), moving toward fewer soil disturbance and tillage events, integrating livestock, trialing bio fumigation, these are all areas where growers in Wisconsin are leading," she said.

Diane Mayerfeld is the sustainable agriculture coordinator for the University of Wisconsin-Madison's Division of Extension. She said regenerative agriculture has become increasingly popular in the last five years as farmers and food companies look for ways to differentiate themselves from the increasingly ambiguous term "sustainable."

"People who wanted to do that kind of work were frustrated by all the people who use sustainable to mean something very minimal. And so they've really focused on saying 'We don't want to just keep agriculture the way it is. We want agriculture to make things better.'" Mayerfeld said.

But she said there is no legal definition for regenerative agriculture and that means companies can set their own standards for what the term means.

Looking at McCain Foods' plan, Mayerfeld said their beginner level standards aren’t what she would consider ambitious and include many practices that are standard for growers. And she points out there are several gray areas for how the standards should be implemented.

"I have some sympathy for whoever wrote this. You know, they're trying to put something on one page and there's a huge amount of variation in the specifics of what you can and cannot do, depending on the soils you're growing on, depending on the weather, depending on the pest species that you're dealing with," she said. "Even within Wisconsin, the challenges and the practices are different between, say the Central Sands counties like Portage County, and then some of the counties where potatoes are grown on less sandy soils like Langlade County."

Mayerfeld said McCain Foods' plan is mostly on par with the initiatives set by other major food manufacturers. But she said even if companies aren't committing to big changes in the short term, having more major players take the first step toward a more sustainable system is still a positive change.

"I do also think it's very important for consumers to keep up the pressure and I also think it's important for government to continue to create policy and enforce that policy to protect the public," Mayerfeld said. "I think these commitments by companies can change company culture, and I think that can be hugely important and they can also motivate farmers to change their practices."