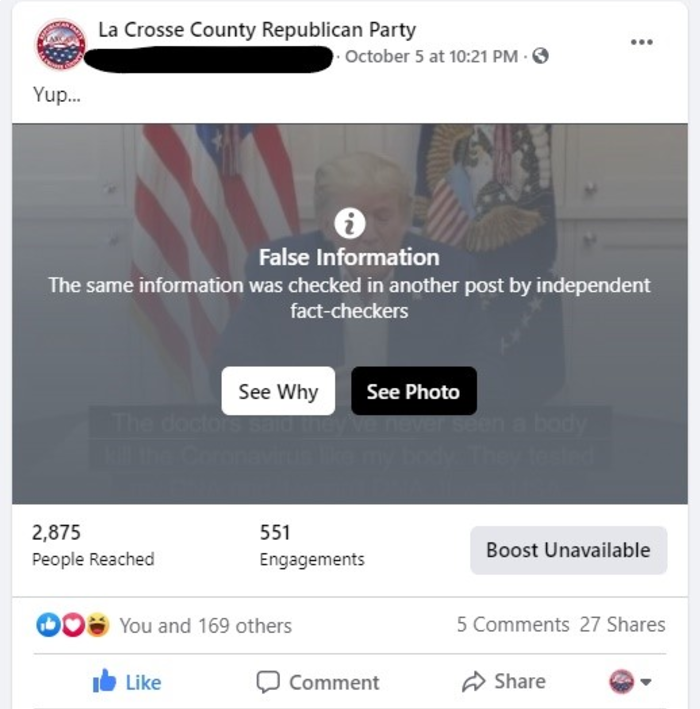 The head of the La Crosse County Republican Party says they’ve been restricted from buying advertisements on Facebook after the social media company claimed the party repeatedly shared false information on their page.

Chair Bill Feehan said the county party's account was given no warning before Facebook reduced the reach of their page and banned them from buying ads. Feehan is also chair of the 3rd Congressional District Republican Party, and he said Facebook restricted that page as well.

"Free speech issues go right to the heart of our democracy and this is going to have an impact on one of our state elections here," Feehan said. "Had we known Facebook was going to do something like this, we might have done mailings or radio ads or something else. But they’re interfering in our election." 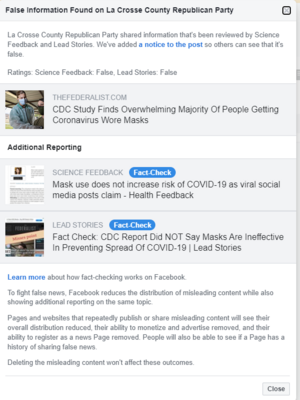 One was a YouTube video claiming Democratic presidential candidate Joe Biden wore a wire during the first debate in September, a claim that has been widely debunked.

Another was an article from conservative website The Federalist claiming a U.S. Centers for Disease Control and Prevention report shows masks are not effective at preventing the spread of COVID-19. That claim has also been found to be false.

Feehan said he didn't feel sharing the posts warranted what he describes as "censorship" from Facebook.

Ken Paulson, director of the Free Speech Center at Middle Tennessee State University, said Facebook does have the legal right to decide who gets to run ads on their platform as a private company.

"A company has an absolute right to decide what it stands for. So Facebook can decide that an ad is misleading, but they also can be concerned that that ad might promote an entity, a page on Facebook that would be misleading and untruthful. They can make that call," Paulson said.

He said companies like Facebook generally have no incentive to restrict political ads or turn down money, but more and more social media platforms are having to make calls like this given the current political rhetoric.

"Organizations, parties, candidates, individuals are willing to post anything on social media to try to win. And that is a level of ... nerve that we've never seen," Paulson said. "Facebook and others are trying to go, 'Well, does anything go? We don't want anything to go, we don't want falsehoods to be widely shared.' But over and over again, in this election season, we're seeing falsehoods from both parties."

Facebook officials didn't return a request for comment. In a statement shared earlier this month, the company said it was taking steps to fight misinformation ahead of the November election on their site, including displaying warnings on content that was debunked by third-party fact-checkers.