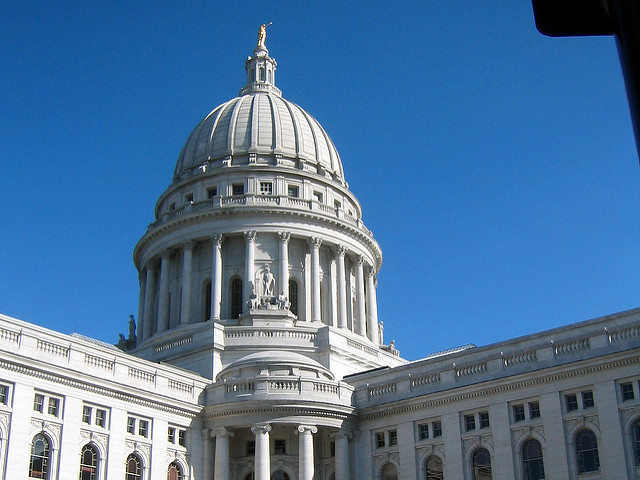 Expert: Wisconsin Legislative Map Produced 'The Fingerprint Of A Gerrymander

An expert on political statistics told a panel of federal judges on Wednesday that Wisconsin's Republican-drawn legislative map was about as biased as possible in favor of GOP candidates for the state Assembly.

Ken Mayer, a University of Wisconsin-Madison political Science professor, said the map was so gerrymandered that it could be expected to deliver a Republican majority in even the biggest of Democratic wave elections.

Mayer was called to testify as an expert witness for the plaintiffs in the case, a group of Democratic voters who argue the map violates their constitutional rights because it treats them unequally based on their political beliefs.

Mayer developed a variety of statistical models for the trial showing how the map would fare under different types of elections.  Under one scenario, which replicated 50-50 turnout between Republicans and Democrats, Mayer said the map would leave Democrats well short of a majority.

In another scenario, Mayer assumed that Democrats received almost 55 percent of the statewide vote, which would mirror what happened in 2006, their biggest wave election in decades.  Even in those circumstances, Mayer said the map was so gerrymandered that it could be expected to deliver a 54-46 seat Republican majority.

"The bias in (the map) is about the maximum you can get," Mayer said.

Mayer also developed an alternative map with a similar number of competitive Republican and Democratic seats.  Under that plan, he said control of the Legislature would be apt to switch back and forth between the parties.  That's significant because if plaintiffs prevail in this case, they want the old map thrown out and a new, more competitive map drawn in its place.

The court also heard Wednesday from Republican legislative aide Tad Ottman, who said the partisan "score" for each legislative district was just one factor among many Republicans looked at when they drew the map.

The trial is expected to run thru Friday.