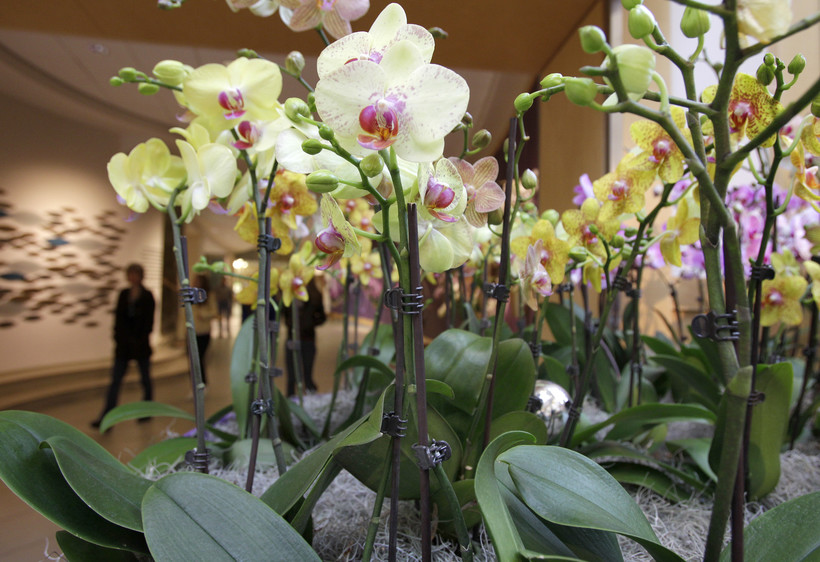 Visitors walk by a display of orchids at the eighth annual Orchid Mania show at Cleveland Botanical Garden in Cleveland on Friday, March 4, 2011. Amy Sancetta/AP Photo

Expert: Orchids Are Relatively Easy Plant To Care For

From the grocery store to the hardware store to the big box store, beautiful orchid plants seem to be everywhere. Are you tempted to buy one but worried it won’t survive? An orchid expert said most orchids are actually very easy to care for and those sold in retail establishments are easy-to-grow varieties requiring minimal care.

"People tend to kill them with kindness," said John Wirth, conservatory curator at Olbrich Botanical Gardens in Madison. "For the most part, they aren’t that difficult. Over watering seems to be the No. 1 cause of death in orchids."

Generally, he said, most orchids do well with being watered about once a week with water that is room temperature. What’s important is making sure all the roots get moisture. Orchids should be in pots that have drainage holes so the water can run through.

Most orchids seen in stores don’t need soil, they grow in bark or are attached to a piece of wood.

"The thing to remember is that orchids grow on branches in nature," said Wirth. "Their roots are exposed to the air. They're not in soil like we typically think of plants. You have to make sure the roots get a lot of air exchange."

The bark medium that most orchids are planted in should be changed every two or three years. He suggests repotting in the late winter and soaking the plant for 30 minutes or so in warm water before removing it from the original pot. This will help prevent healthy roots from snapping off.

Wirth recommends using bigger chunks of bark, he said he has had great results with a medium called Orchiata. When looking for good medium check to see if you can squeeze the bark, if it’s soft, don’t buy it, look for bark that is rock hard, he added.

When changing the bark, cut away the old, black roots using a sterilized cutting tool. Making sure to re-sterilize it after every cut. This will help stop any disease from spreading, Wirth said.

The flowers on your orchid will last for months, Wirth said. How often they bloom depends on a number of things, including type of orchid and its environment.

Orchids need bright light but not direct sun. Some also need to be exposed to cooler temperatures to bloom again and fertilizing spring through fall, with fertilizer formulated for orchids, will also help keep the plants healthy, he added.

The easiest to grow orchid is the phalaenopsis or moth orchid, he said.

"It's a great starter plant, (its) tolerant of over watering, doesn’t need a lot of sunlight, and they will re-bloom," said Wirth. "You really can’t go wrong with them."