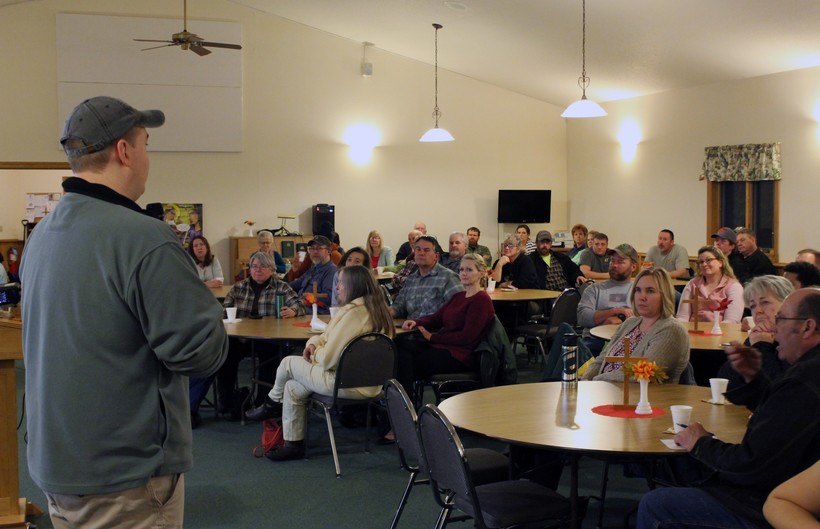 Barron County Sheriff's Department Emergency Services Director Mike Judy speaks in January to around 50 people at the Dallas Lutheran Church in the Village of Dallas during an active shooter training session. The presentation was followed by a mock shooting in the church sanctuary. Rich Kremer/WPR

'Is Everybody Ready?': Barron County Trains Residents On How To Survive A Mass Shooting

The United States is mourning the loss of 17 people in last week’s mass shooting at the Marjory Stoneman Douglas High School in south Florida. And once again, many are asking what can be done to prevent tragedies like these and what causes them.

While the national debate continues, Barron County law enforcement in Wisconsin is working to prepare citizens for the unthinkable in an attempt to prevent them from becoming victims in a shooting.

Just after sundown on a cold January night in the Village of Dallas around 50 people from throughout the county filled the Dallas Lutheran Church.

They gathered in a large fellowship hall replete with a spread of coffee and homemade desserts. But they didn't come to worship, they came to learn how to improve their chances for survival in a mass shooting. Dallas Lutheran Church in the Village of Dallas. Rich Kremer/WPR

Pastor Heather Kistner heard the Barron County Sheriff’s Department was offering free active shooter training, so she invited them and other congregations from around the county.

"We need to learn how to do this," said Kistner. "If something were to ever happen, I would want to say that I helped to equip to save lives, and since the sheriff's department is willing to help and do that, facilitate these, what a win-win."

In the last year and a half, the sheriff’s department has held more than 80 active shooter trainings for schools, businesses and churches.

The classes are lead by Barron County Sheriff's Department Emergency Services Director Mike Judy, who said he's responded to three mass shootings in his 18-year law enforcement career, including the 2012 shooting in an Aurora, Colorado movie theater that left 12 people dead and 70 injured.

Judy said the goal of an active shooter is to kill as many people as possible in the least amount of time. But how they do that has changed since the mid-1990s.

Schools and businesses developed lockdown procedures to keep a gunman outside, but now shooters are anticipating that and bringing their weapons indoors.

"The problem is although the shooter changed his approach by parking his vehicle and coming inside, we as the building occupants, we never changed our response," Judy said.

He said that means the old approach of finding shelter and staying put has become more dangerous than running or fighting back.

"We huddle in the corner. We hide from the shooters. Safety in numbers, protection from within," said Judy. "And because of that we’re seeing numbers that we’ve never seen in mainstream media describing an active shooter… numbers like 12 people killed, 25 people killed, 40 people killed, 546 people injured."

During the presentation he told attendees to be aware of their surroundings and look for exits and things that could distract or immobilize a shooter.

"Look for avenues for escape, identify weapons. How can a fire extinguisher be used as a weapon?" Judy asked. "Yeah, spray him in the face with it, knock him in the head with it. If you knock him out, hey, cool. If you kill him, cool, points for you. Don’t come into a church and shoot people."

After wrapping up the discussion portion of the active shooter training, Judy opened a black duffle bag filled with face masks, goggles and a plastic gun called an Airsoft pistol, which shoots plastic pellets. He led attendees from the fellowship hall to the sanctuary for a live, role-playing exercise.

Inside the Dallas Lutheran Church sanctuary groups of 15 people sat in pews waiting anxiously for a shooter Judy said could come from anywhere. A group of 15 participants wait for the mock active shooter to storm the sanctuary. The rest of the participants watch from the balcony above. Rich Kremer/WPR

"Is everybody ready?" asked Judy.

At that moment a member of the congregation who had concealed the airsoft pistol stood from his pew and rapidly fired 19 shots in all directions, hitting five people.

Attendees jumped and scattered from the shooter as Judy had instructed. It all played out within 15 seconds. In one of the sessions, an elderly couple threw a purse and a Bible at the shooter.

Kelly Martinson, of Cameron, was hit in the shoulder blade by the shooter, an injury considered nonfatal. She felt empowered by the active shooter training.

Martinson said she doesn’t believe tightening gun laws will keep criminals from getting guns and planning attacks, so it’s up to citizens to learn how to protect themselves.

"I think being prepared is a really good idea," said Martinson. "You can do measures to prevent but it seems like it’s been an ongoing thing for not just now but years and years and years. So, the likelihood that would occur, I would rather be prepared."

Wayne Bjurstrom, of Clayton, identified himself as an ex-military member who has a concealed carry permit. He said training for active shooter situations is critical because even in rural Wisconsin it's going to happen.

"It’s a shame that we should have to talk about this for a church or even carry in church, but unfortunately society has forced us to do it," said Bjurstrom.

At least 11 other counties in the state offer similar active shooter training for schools and organizations. As mass shootings continue in the U.S. and society at-large continues to debate how they can be prevented, law enforcement officers like Judy want people to understand they have options and can be proactive in a worst-case scenario.