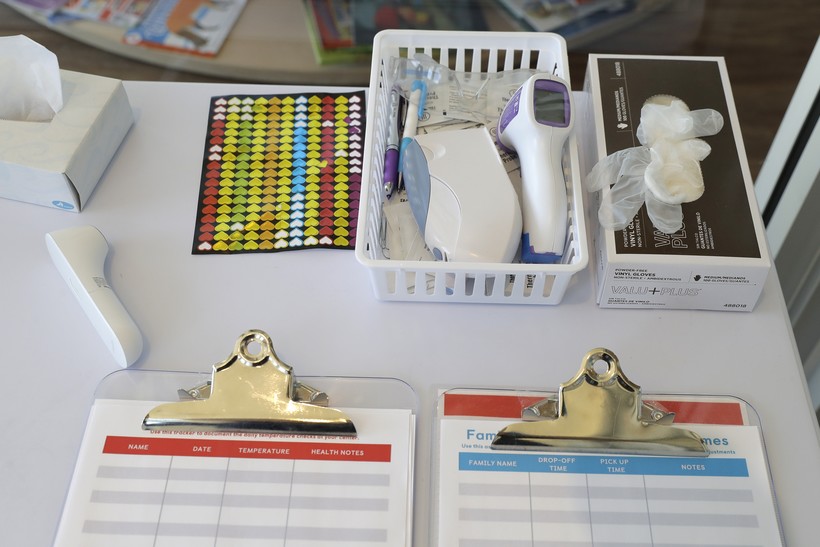 In this May 27, 2020, photo, thermometers, gloves and cleaning swabs sit on a table at the entrance to the Frederickson KinderCare daycare center, in Tacoma, Wash. As a precaution against the spread of the coronavirus, workers and children have their temperatures checked every day before they enter the building. Ted S. Warren/AP Photos

Gov. Tony Evers’ administration is putting forward a plan to spend about $132 million of federal coronavirus aid on child care programs across Wisconsin by this summer — but the proposal requires approval from GOP lawmakers before the money can be paid out.

Wisconsin received about $149 million for child care programs under the second COVID-19 relief package approved by Congress in December. Under the Evers administration’s plan, about $132 million of that would be distributed by June 30 to help providers struggling during the pandemic. Funds could pay for programming, technology and staff salaries.

In a prepared statement on Thursday, Evers lauded the program as one that will provide stability to the industry and the families who rely on it.

According to the state Department of Children and Families, $51 million in previous federal aid was distributed last year to about 2,700 child care businesses across Wisconsin who serve about 80,000 children.

More than 2,100 of those providers used funds to recruit and retain workers. The industry has faced worker shortages for years, in part due to low pay and poor benefits. Of the $132 million in new aid, $10 million would be directed toward worker recruitment and retention efforts.

The majority of the funds, about $106 million, would be directed into a broad fund that provides support to providers for programming and staffing, $10 million would be used for necessary technology upgrades at facilities and $5.5 million for administrative support.

Because the federal funding is so substantial, state law requires the Legislature’s state budget committee to approve how it is spent. The committee, which is controlled by Republicans, weighed in last month on the Evers administration's plans for K-12 education coronavirus aid, rejecting the state Department of Public Instruction’s proposal to base aid on criteria like poverty levels and test scores and instead prioritizing funds for schools that have provided in-person instruction during the pandemic.

Co-chairs of the committee didn’t immediately respond to a request for comment on the child care plan.