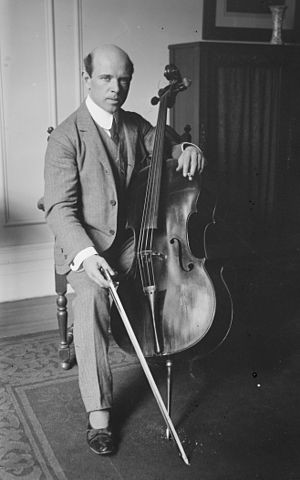 It wasn’t that Pablo Casals was always kind. After all, the fiery-tempered Spaniard had once punished a double-dealing manager with some rough turns in a revolving door. But when it came to judging students, the celebrated cellist could be gentle almost to a fault.

In the late 1920s he was staying at the Berlin home of Francesco von Mendelssohn, a distant relative of composer Felix Mendelssohn, who invited up-and-coming cellist Gregor Piatigorsky to come over and meet Casals and another guest, the young pianist Rudolph Serkin.

Casals said that he always enjoyed meeting young, talented musicians. He wanted to hear Piatigorsky and Serkin play. The two twenty-something musicians were nervous enough as it was, but being asked to perform together for the great Casals when they had just met made them all the more ill-at-ease. With reluctance they took on Beethoven’s Sonata in D.

Somewhere in the middle of it, they gave up.

Then they played Schumann’s cello concerto and some things by Bach, both badly.

Several years later, Piatigorsky met Casals in Paris. They played cello duets long into the night, and, feeling relaxed, Piatigorsky reminded Casals of his praise for the bad playing in Berlin.

“Leave it to the ignorant and stupid who judge by counting only the faults,” he said. “I can be grateful, and so must you be, for even one note, one wonderful phrase.”