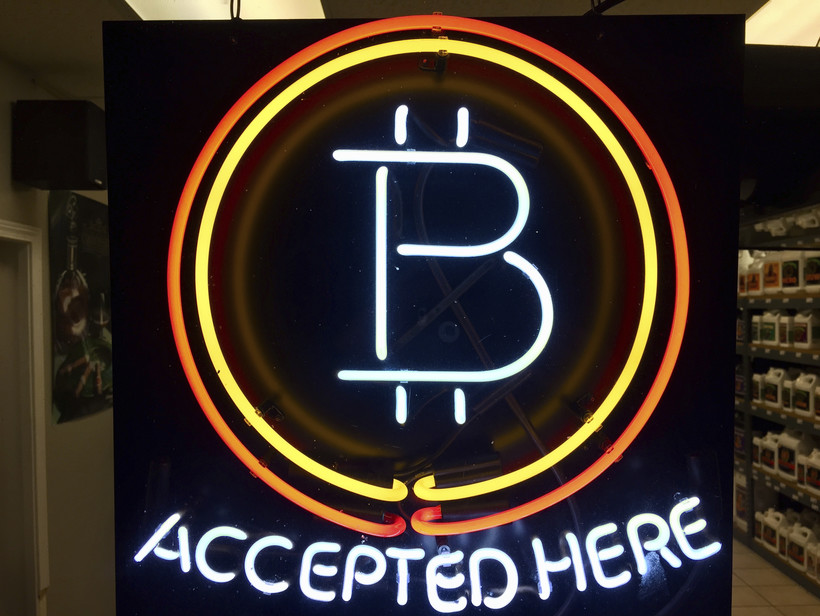 In this Feb. 7, 2018, photo, a neon sign hanging in the window of Healthy Harvest Indoor Gardening in Hillsboro, Ore., shows that the business accepts bitcoin as payment. Gillian Flaccus/AP Photo

Politicians in Wisconsin could accept bitcoin and other so-called "cryptocurrencies" as campaign contributions under a policy up for consideration by the state Ethics Commission this week.

Bitcoin, the most well-known cryptocurrency, is a form of privately issued digital money. One bitcoin is currently worth about $8,500.

Bitcoin has gained popularity since 2009 and is accepted in some brick-and-mortar stores around the country. Federal candidates, including Kentucky Sen. Rand Paul, have accepted bitcoin into their campaign coffers in recent years.

According to Phil Anderson, chair of the Libertarian Party of Wisconsin, some Wisconsin politicians have received offers of bitcoin donations, but they’re wary of accepting them due to the lack of a state policy on such contributions.

"What we’re hoping for is a ruling that helps us convert those donations to dollars ... and have them ruled to be an actual currency donation, so they can go toward our fundraising totals," Anderson said.

Anderson said Libertarians have embraced bitcoin because of its promise of greater anonymity and privacy than traditional currencies.

"We have a lot of people out there who support Libertarian ideas and Libertarian candidates who, if at all possible, prefer to use something other than government controlled money, and that’s essentially what cryptocurrencies are," he said.

The Federal Election Commission greenlighted bitcoin donations in 2014, classifying them as "in-kind contributions."

However, some skeptics have expressed concern about the anonymity of bitcoin mingling with the political process. Bitcoin can’t be traced back to individuals, because transactions are tied to digital addresses, not real-life names, and one user can have multiple addresses.

Anderson said he doesn’t want to get around identifying contributors, he just wants to open up another avenue for potential donors.

"They are all really trying to use cryptos more than the dollar, more than any other government backed currency, just on philosophical grounds," he said. "And from our side of it, we’d like to accommodate that."

Anderson said it’s time for Wisconsin to follow in the footsteps of other states with cryptocurrency policies, including Washington, D.C., and Montana.

"Wisconsin should not fall behind in at least having an opinion on it," he said.

California officials have discouraged campaigns’ acceptance of the currency. The Kansas Ethics Commission issued an opinion last year rejecting the use of bitcoin for campaign donations in the state.

David Buerger, staff counsel at the Wisconsin Ethics Commission, said the commission will take testimony on Tuesday from the public on the issue. The commission can choose to issue a formal advisory opinion on the matter, or refer the issue to the state Legislature or Attorney General’s office.