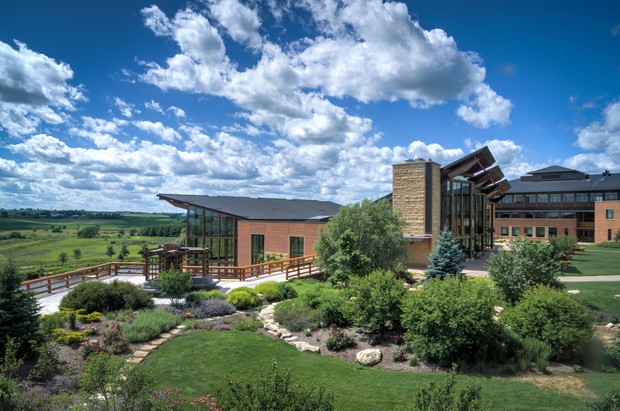 Epic Systems, the multibillion-dollar healthcare records company based in Verona, will delay its mandatory return to in-person work according to an email sent to employees Saturday night.

The company, which had been planning the start of a phased return plan Monday, said it took the step after it was contacted by Public Health Madison and Dane County, the agency that oversees area public health restrictions aimed at slowing the spread of COVID-19.

"Late this week, one business day before our phased plan was scheduled to begin, we received a letter from PHMDC questioning the compliance of the plans we previously discussed with them," read a copy of the email obtained by WPR. "It is our intention to be entirely compliant with any government order. As a result of the letter from PHMDC, we are requesting clarity in their guidance and are specifically requesting that PHMDC approve our plans."

Epic said roughly 4,200 of its employees were on the campus southwest of Madison last week. The company's workforce totals roughly 10,000.

It had planned to start requiring those still working from home to return to in-person work in phases, with phase one beginning Monday. But hundreds of employees pushed back, with some calling the process arbitrary and potentially dangerous.

While Epic management has argued that employees are more productive when they're able to meet in person, the company said over the weekend that it would no longer require people to return to work Monday.

"To ensure we do not fall out of compliance with the public health orders, we are modifying our return-to-work policy at this time," the company wrote to employees. "If you are in phase 1 and do not feel that your personal circumstances or concerns allow you to return to campus, you are no longer required to do so."

The email instructs affected employees to contact Epic's human resources department if they plan to continue working from home.

Epic has said its return-to-work plans are being overseen by a group of experts that includes Dr. Stephen Ostroff, a former acting commissioner of the Food and Drug Administration, and Dr. Nicky Quick, the former top public health official of Orange County, California.

The Wisconsin State Journal reported that Public Health Madison and Dane County public health services supervisor Bonnie Koenig sent a letter to Epic leadership this week questioning the company's plans. That letter sought an explanation of the company's plans to return to in-person work when remote work was possible.

Epic Systems sent a letter back to Koenig Saturday informing her of the company's decision to modify its plans so that staff members are not required to return to campus. The company said it believed it was in compliance with "Emergency Order #8," the county's most recent coronavirus public health order.

"We hope that you can provide us with additional guidance on your regulations," read the letter from Sverre Roang, Epic's chief administrative officer. "Specifically, we request that PHMDC work collaboratively with us and confirm that our plans comply with Emergency Order #8. We are committed to bringing staff back to campus."