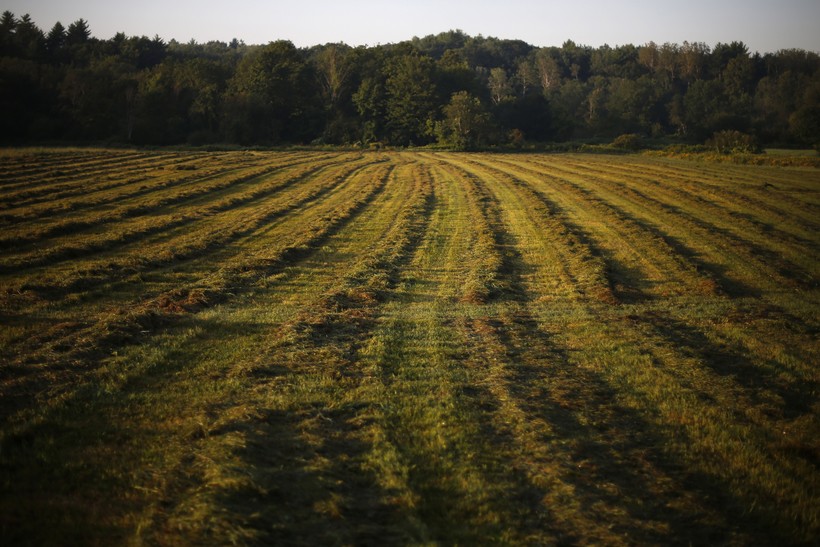 In this Thursday Aug. 15, 2019 photo, hay dries after a recent cut at Stoneridge Farm in Arundel, Maine. The farm has been forced to shut down after sludge spread on the farm land was linked to high levels of PFAS in the milk. Robert F. Bukaty/AP Photo

Environmental Regulators Forge Ahead On 'Forever Chemicals' While Some Work Postponed

Wisconsin environmental regulators say they're still moving forward on work to address so-called forever chemicals, known as PFAS, during the coronavirus pandemic. ­­­­­­Yet, the Wisconsin Department of Natural Resources acknowledges some work is being postponed.

Perfluoroalkyl and polyfluoroalkyl substances (PFAS) are chemicals of chief concern to environmental and public health officials because they don't break down easily in the environment, and they're associated with causing cancer and other health problems.

"Because our governor or Legislature hasn't lifted that window, we essentially have that 30-month window to develop a rule," said Zellmer. "We need to do what we can and continue to conduct our business as we can throughout this period."

As the state responds to surging coronavirus cases, a spokesperson with the Wisconsin Department of Health Services said Monday it hasn't postponed work with the DNR on the development of standards.

The agency received approval from the Natural Resources Board to begin work on setting enforcement levels in January.

Zellmer said work on a multi-agency PFAS Action Plan has been delayed as a result of the pandemic.

The plan, which Gov. Tony Evers directed agencies to develop in August, seeks to prevent future contamination, identify and minimize exposure, address past pollution and educate people about the risks of PFAS. Zellmer said officials had hoped to complete the plan by July 1, but meetings have been canceled through April due to the governor's "safer-at-home" order.

The agency is also continuing 35 investigations where PFAS contamination has been found in cities such as Milwaukee, Madison and Marinette. Staff are working on cases deemed essential when it's safe to do so, but some tasks have been postponed.

"It was really a combination of ensuring that we also protect our contractors while doing the work as well as ensuring that any homeowner has protection," said Perkins.

Treated sewage sludge from the Marinette wastewater treatment plant where significant levels of PFAS were found had been spread on surrounding fields. The DNR previously estimated around 240 landowners were in the affected area.

In a letter, state Reps. John Nygren, R-Marinette, and Jeff Mursau, R-Crivitz, said they understood the decision to temporarily suspend sampling. However, they urged company officials to find other ways to collect samples without putting workers at risk.

A spokesperson for Johnson Controls said they share the legislators' desire to resume sampling when it's safe to move forward.

But, both lawmakers and residents have criticized the company for not moving faster to sample fields when the DNR first requested them to do so in July.

"They should've been on this 10 months ago," said Doug Oitzinger, Marinette resident and the city's former mayor. "I don't know what can be done because I don't want to endanger anyone's health... I guess we've got to wait it out."

As coronavirus has disrupted business, the DNR is also providing companies and industry with guidelines on how it will seek to maintain environmental compliance. The guidance follows an announcement from the U.S. Environmental Protection Agency that it wouldn't seek penalties for noncompliance with routine monitoring and reporting. The move has prompted an outcry from environmental groups.

Zellmer said all state environmental regulations remain in place unless suspended by the governor.

"What we're asking is for our regulated community to alert us if they become aware they're going to have an issue with meeting one of the regulatory requirements," he said. "We can work with them on the best approach."

Due to the public health emergency, Zellmer noted the agency is postponing all routine compliance inspections unless there's an immediate danger to public health or the environment.

In a statement, Tony Wilkin Gibart, executive director of Midwest Environmental Advocates, said it was heartened by the DNR's approach to assist regulated entities rather than exempt them from environmental compliance.

"We are communicating with DNR staff, and we intend to closely monitor exemption requests," wrote Gibart. "It is our expectation that any exemptions issued by DNR will be limited in scope and will be granted only in extraordinary circumstances."

Wisconsin's Green Fire Executive Director Fred Clark said the pandemic is creating unintended consequences for businesses, including farms or other operations that are  dumping milk or food.

"The department needs to quickly develop realistic guidance for businesses and governments affected by COVID-19, and I expect they will also have lots of allies in assuring there is no free pass for polluters in an extraordinary time," wrote Clark in an email.

A spokesperson for the state's largest business lobby Wisconsin Manufacturers and Commerce said representatives were unavailable for comment Monday.

The DNR wants companies and other parties to immediately report any spills or problems that pose an imminent threat. Any other issues should be reported in advance to the agency's compliance staff. Those who require assistance are asked to explain through email or an online form what kind of flexibility is needed, measures taken to minimize environmental impacts and the reason for any noncompliance.