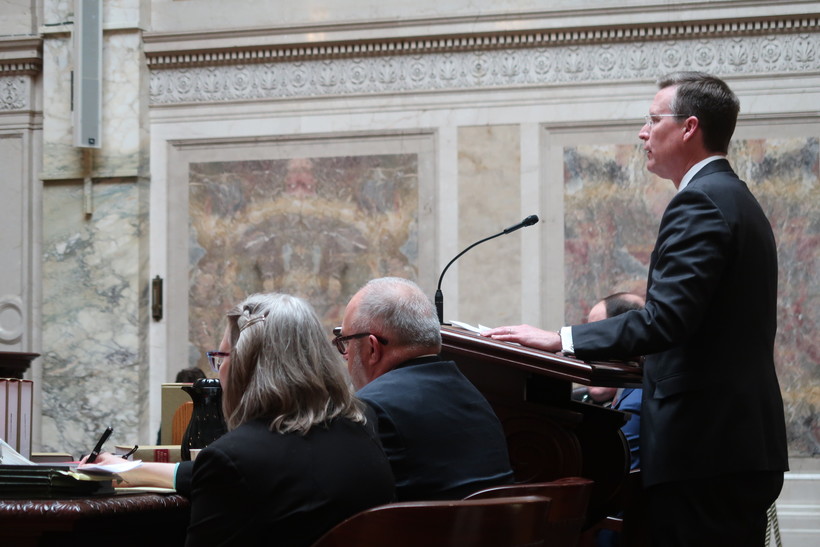 Eric McLeod, an attorney for Enbridge Inc., argues the Dane County's insurance requirements are invalid under the law, in front of the Wisconsin Supreme Court on Tuesday, March 26, 2019. Danielle Kaeding/WPR 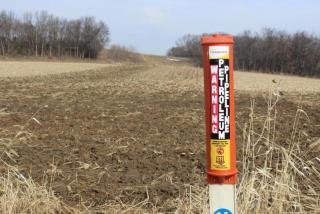 The Wisconsin Supreme Court heard arguments today over an insurance dispute between a Canadian energy firm, Dane County and a group of landowners. The fight stems from Dane County’s requirement that Enbridge Inc. obtain special pollution insurance as part of a permit for a pipeline expansion there.

In April 2015, Dane County’s zoning and land regulation committee approved a permit for Enbridge to build its Waterloo pump station as part of the company’s plans to expand its Line 61 oil pipeline up to 1.2 million barrels per day. The permit contained insurance conditions, including a requirement the company obtain $25 million in environmental impairment liability insurance.

Several months later, lawmakers inserted a provision into the budget that blocked counties from requiring insurance if an interstate hazardous pipeline operator like Enbridge already had comprehensive general liability insurance that covers sudden and accidental pollution.

The county ultimately kept the insurance conditions in the permit despite the law change, triggering a legal battle that’s reached the state’s highest court.

Attorney Eric McLeod, who represented Enbridge in the case, said the company believes the insurance requirements are invalid and that they should be stricken from the permit.

"The county had repeatedly conceded both, again, before the final permitting decision was made, but also during the course of these proceedings, that there had never been a dispute about whether or not Enbridge satisfied that requirement in the statute and the conditions were unenforceable," said McLeod.

Justice Daniel Kelly questioned whether the permit as it stands accomplished the same result Enbridge is seeking since the company has shown the county that it carries the insurance necessary to trigger the state exemption.

"They have no application right now at all because you’ve shown the CGL (comprehensive general liability insurance) coverage, but it would spring into existence if at any point you didn’t have the CGL coverage, right?" asked Kelly. "How is that different?"

McLeod said the county’s permit requirements are not a matter of whether the insurance conditions are unenforceable, but whether they can be imposed under the law.

McLeod argued that language isn’t contained in the statute and Dane County didn’t require them to maintain that insurance.

Justices also questioned whether Dane County knowingly flouted the law when it kept the insurance requirements within the permit it issued to Enbridge.

"My concern is how do I look at the arguments of Dane County if they knowingly violated a state law and clearly there’s no contest they’re subject to the state law," said Justice Pat Roggensack.

David Gault, assistant corporation counsel for Dane County, said there was no intent to violate the law, but maintain the status quo. He argued the permit should be sent back to the county’s zoning committee for review.

Justice Kelly questioned why the county board didn’t remand the issue back to the committee after the change in state law, to which Gault responded a procedural issue prevented the board from doing so. Kelly asked why the court should intervene to fix the matter.

"I think you have authority when the record clearly indicates that there was not a meaningful review," said Gault.

Attorneys for Dane County and the landowners also argue the company hasn’t proved it carries the comprehensive general liability insurance noted in the statute.

"I think the conclusion is that Enbridge has never shown anyone their insurance policies," said Madison attorney Patricia Hammel during the hearing.

"That’s different than showing proof of insurance so you recognize that, don’t you?" asked Justice Roggensack.

Hammel, who represents landowners in the case, said the county’s insurance conditions had an ongoing obligation to show coverage.

McLeod argued Enbridge provided a certificate of insurance and summary of its coverage to the county’s insurance expert during the permitting process.

He said the company doesn’t have to provide proof of its policies under the permit because the county’s requirements are invalid under the law.

"But, Enbridge has never been asked and Enbridge has not indicated it wouldn’t be willing to be forthcoming and disclose to the county what insurance it has," said McLeod.

Attorneys for Dane County and the landowners want the court to send the county’s permit back to the county’s zoning committee for further review.

Five justices on the Wisconsin Supreme Court will issue a ruling on the case. Justices Rebecca Dallet and Shirley Abrahamson have withdrawn from participation.