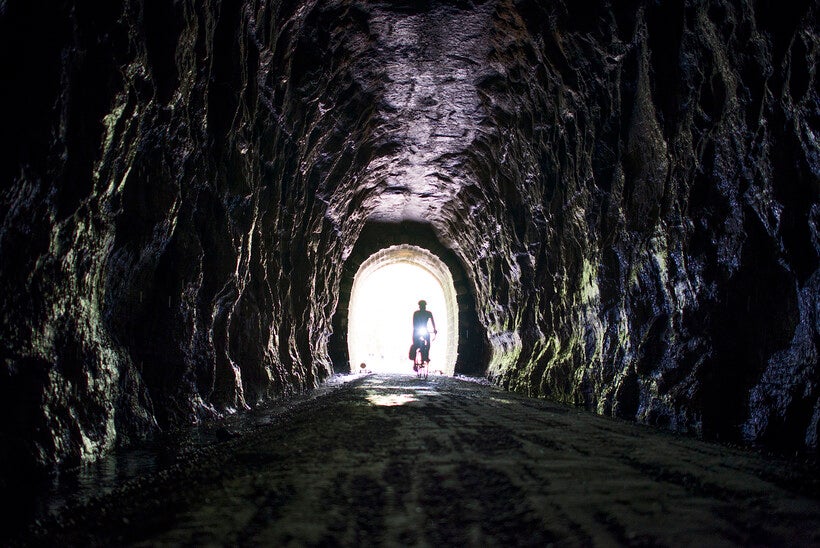 The Elroy-Sparta State Trail is considered the first rail-to-trail in the U.S. The 32.5-mile route goes through three rock tunnels and five small towns and is a favorite Wisconsin bicycling destination. Bicycle Federation of Wisconsin (CC BY)

The Elroy-Sparta State Trail in western Wisconsin officially reopened over the weekend. It's the culmination of years of restoration work.

Summer flood damage in 2018 closed the popular 32.5 mile-long trail, which was the first rail trail in the country when it opened in the late 1960s. The state Department of Natural Resources said in a press release the trail needed two complete bridge replacements and four landslide repairs, among other work. 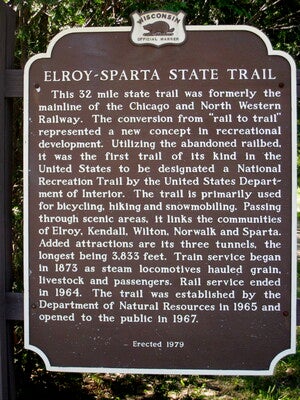 A plaque on the Elroy-Sparta State Trail in Wisconsin. Trebz (CC BY)

Heidi Prestwood, executive director of the Sparta Area Chamber of Commerce, said the long closure hit local businesses hard as they missed out on tourism dollars.

"It was frustrating for us here in our office," Prestwood said. "We would get phone calls and people would ask about the closures and then they would say, 'Well, we'll change our mind, we'll go to a different trail,' which hurt a little bit."

According to the DNR, the trail sees as many as 60,000 visitors a year.

Missy VanLanduyt is the DNR’s parks and recreation management section chief. While tunnels on the trail reopened at the start of the month, the department held a grand reopening event Saturday.

"We want people to know that it's open, and it's ready for use and just encourage people to get back out and active on the trail," VanLanduyt said.

According to the department, completing the repairs took $2.3 million in funding, which came from the Federal Emergency Management Administration and the state. VanLanduyt said other small repairs outside the main affected area took the cost up to about $2.5 million.

"The Elroy-Sparta Trail is one of the most popular trails in the state, yet it remained partially shutdown for far too long," a press release about the completion of repairs in December said. "We are thrilled that this trail is finally fully re-opened."

In the release, Marklein and Kurtz complained of "bureaucratic delays" in the process, but VanLanduyt said while the repairs were "not an easy process," the time it took from the initial disaster to the completion of repairs was not far off from projects of similar size and scale.

"The easy part was the funding," VanLanduyt said. "The more difficult part was just the sheer amount of infrastructure that needed to be replaced, and designing all of that, and then going through the bidding process and then finally a very long construction period as well."

While repair work is largely complete, a 1-mile section of the trail was closed as of Friday because of bridge safety concerns. VanLanduyt said it’s set to reopen after Memorial Day weekend, with a permanent bridge replacement coming in late 2023 or early 2024.

Prestwood is optimistic about the trail’s future. She said one goal is to be able to secure grant money to take care of the trail and keep on top of any repair work.

"I've only known the trail during COVID and during the washouts and repairs, so I'm really excited to (see) what this year brings to the trail," Prestwood said.