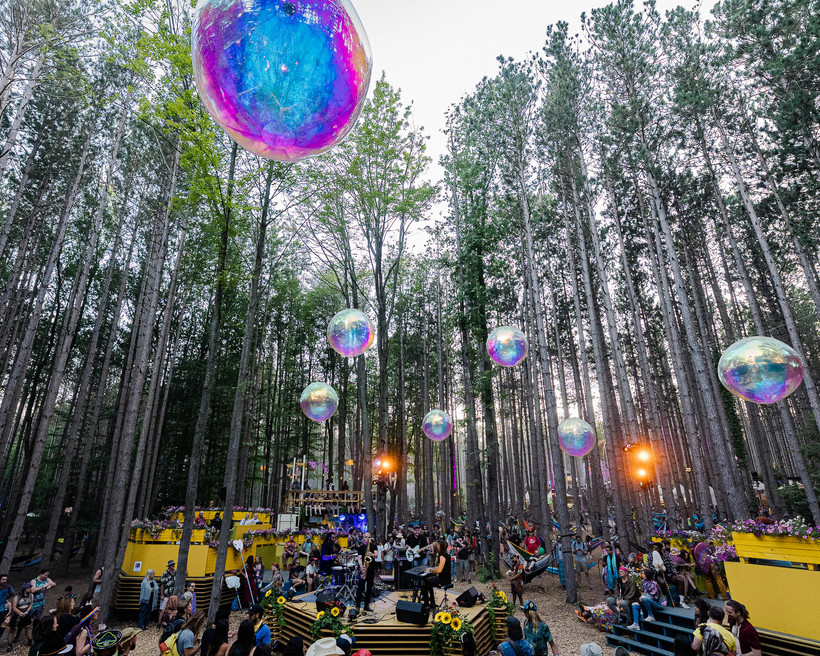 Sherwood Forest, located on the grounds at the Double JJ Ranch in Rothbury, Mighican, provide a magical backdrop to the Electric Forest festival. Eric Bartos/WPR.

Headliners Disclosure, Sylvan Esso, Griz and Louis the Child were among 140 performers
By Sarah Hopefl
Share:

For the first time in more than two years, nearly 50,000 attendees from all over the country flocked to the village of Rothbury, Michigan, off of Lake Michigan for Electric Forest.

The event is an annual four-day multi-genre music, art, and camping festival. This year, it took place June 23-26.

Formed in 2008, Electric Forest showcases acts ranging from electronic dance music DJs to acoustic jam bands. This year, around 140 acts performed over nine stages, including headliners Disclosure, Sylvan Esso, Griz, and Louis the Child. The String Cheese Incident has been a part of the festival since its inception and the group played three shows over the four days. 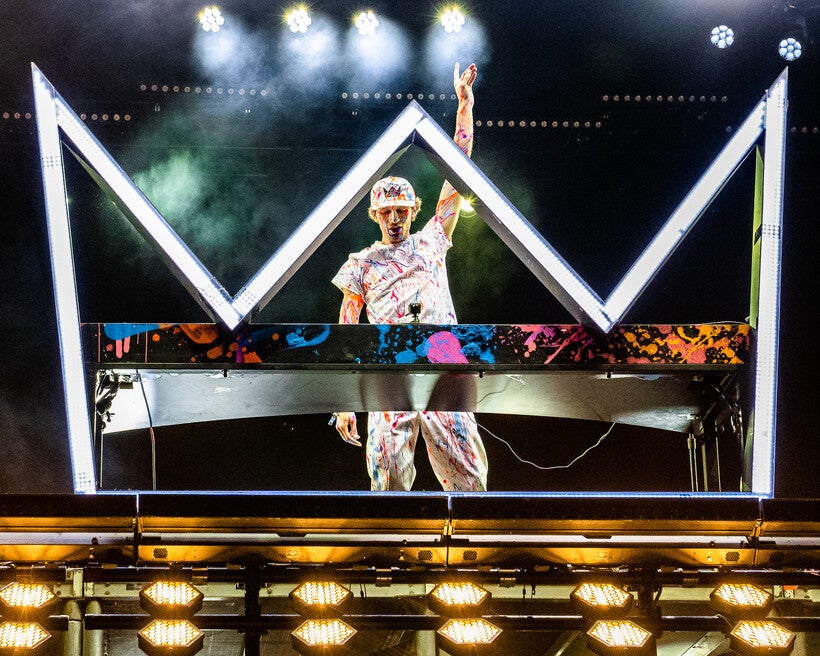 Robby Hauldren of Louis the Child closed out Ranch Arena on the last night of the event. Eric Bartos/WPR

Electric Forest is also known for its large capstone gatherings. For this year’s Saturday Night Shebang, for example, festival organizers provided fireworks that blasted above lights, lasers, and confetti as a crane brought out a giant disco ball while The String Cheese Incident and the crowd sang out Sister Sledge’s classic "We Are Family."

There wasn’t a frown in sight; the energy of the crowd was buzzing throughout the three-hour jam set. 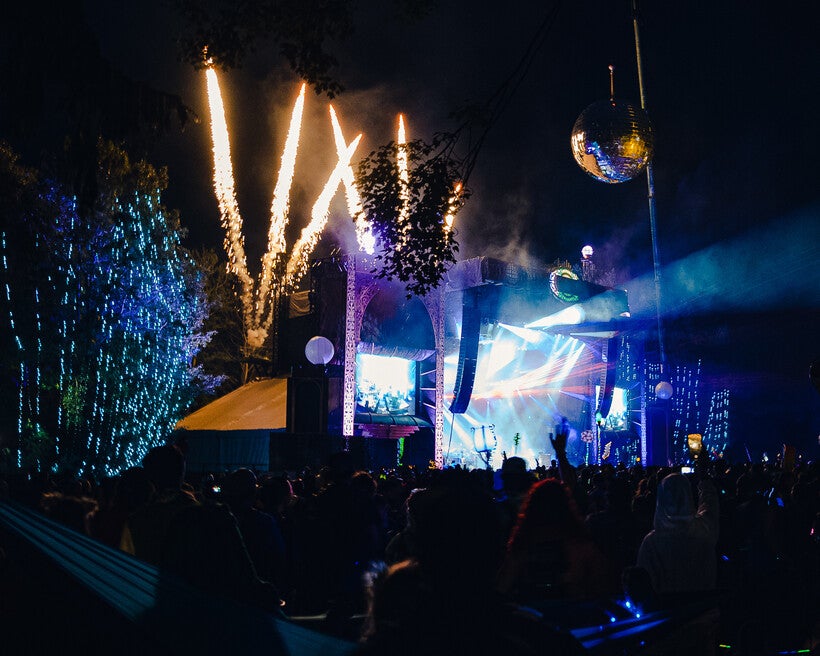 Michael Ababio, of Madison, has attended Electric Forest since 2018. He said he was excited to make the trek across Lake Michigan for the festival.

"This is the place I go to feel recharged," Ababio said. "Being in this space again with so many like-minded people that are here to show love, spread love, and give all the good vibes and connect, you can't beat it."

Electric Forest helped Ababio, like many, learn more about the electronic music scene and to attend more shows back home in Wisconsin.

"When I attended my first EDM concert in Madison, I had no idea how to dress. I felt super out of place. It just didn't click with me at the time," Ababio said. "But after the festival, I definitely started going to more shows and I got a deeper appreciation for it and fell in love with it. Electric Forest was definitely the gateway festival for me."

Ababio, dressed head to toe in a Black Panther costume, planned elaborate outfits for each day.

"That's one of the beauties of this place. It's a place you can express yourself however you want and there's no judgment at all. Everyone is here to connect and appreciate each other’s company. This is the place for you to be who you want to be. Show off your stuff," he said.

Electric Forest has a lot going on outside of the music. You never know what you might find in the nooks and crannies in Sherwood Forest. Attendees can trade meaningful trinkets at the Grand Artique Trading Post, take a nap in a hammock, participate in talent shows, or even get married at the chapel. 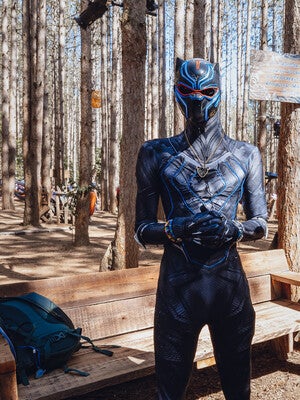 Michael Ababio, of Madison, shows his creative side through cosplay at Electric Forest. Eric Bartos/WPR

Ababio participated in the scavenger hunt, which took him on a wild goose chase around the grounds that ultimately led him to a secret Speakeasy.

Attendee Max Waun agrees the music is almost secondary to everything else the forest has to offer.

"You don't need to be into the music. The music is such a side factor in this," Waun said. "People care about the lineup, but it's such a side piece to all the other adventures waiting for you. It's the 'bestival.'"

Electric Forest strives to support a community of creativity through its Plug In Program. Every year, fans can apply to run and participate in art installations, workshops and seminars.

Denver-based Dark Moon Designs won the Plug In Program for art installations in 2016, making their Ocular Organ a permanent structure in the forest. Attendees can walk up and show their talents, from Chopsticks and Heart and Soul duets, to impressive concertos.

Natalia Janusz, founder and co-owner of Dark Moon Designs, said they wanted to create an installation that was more immersive, where people could interact with the lighting around them.

"We just had this idea, what if you play the keyboard and the lights interact with you. Then it's self-sufficient, you create your own light show as you play," Janusz said. "Then there's this gap between patron and music artists that's erased. Anyone can play. You see it every day here, so many people play really well and get cheered like crazy." 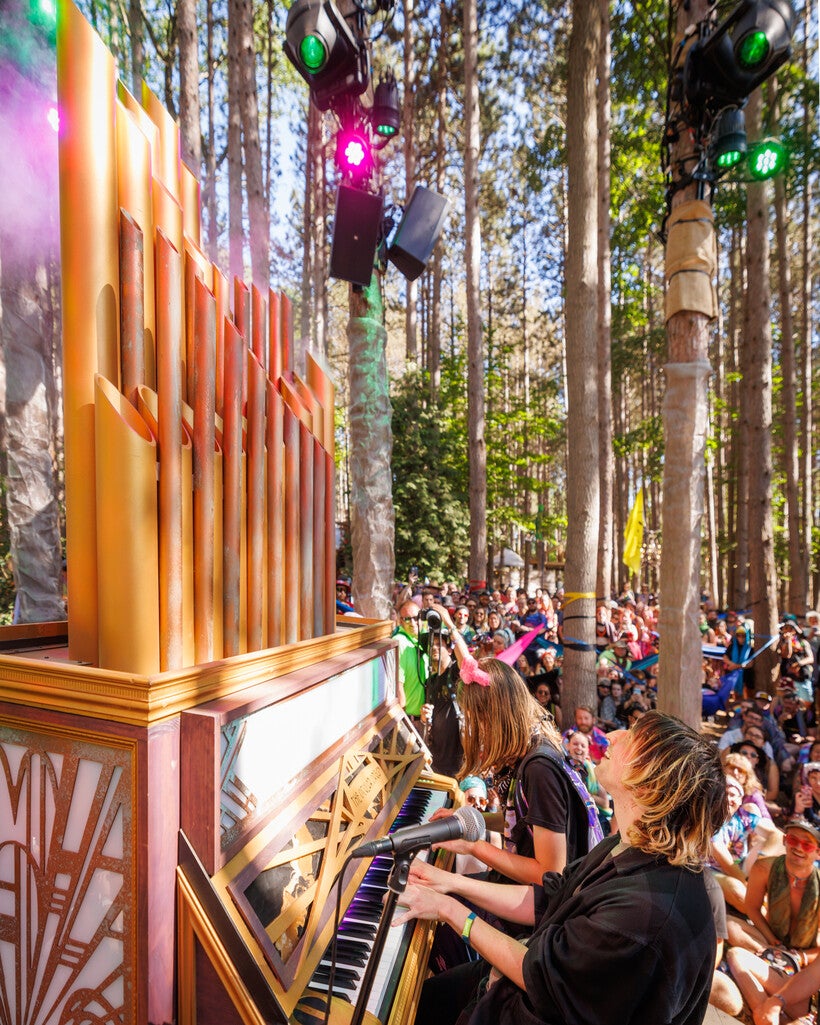 Porter Robinson played a secret set at the Ocular Organ on the last day. Photo courtesy of Electric Forest

A four-day camping festival isn’t for the faint of heart. The festival itself projected the phrase “Electric Forest is a marathon, not a sprint” on screens at the main stages, reminding attendees to drink plenty of water, take naps and eat good food.

Olivia Schroll, who made the journey from Salt Lake City, Utah, said, "My feet hurt, my legs hurt, I'm dirty, but it's fun. That's part of the experience. I knew what I signed up for, and it's good. It's like a badge of honor."

Schroll bought her ticket back in 2019 before the pandemic back when she still lived in Michigan, but living across the country didn’t stop her from attending in 2022.

"We knew we'd do anything, we'd pay anything to be there. It just had to happen. We made it work, we flew out here," Schroll said.

While the overall atmosphere was one of love and fun, the festival coinciding with the news of SCOTUS’s decision to roll back Roe v. Wade added weight to the festivities. 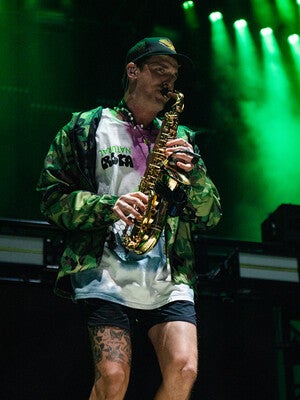 Griz headlined Friday night at Ranch Arena. The Denver-based dubstep artist spoke out against the overturning of Roe vs Wade towards the end of his set. Eric Bartos/WPR

Friday night headliner Griz also used his platform to speak out on the issue towards the end of his set, which was announced that morning.

"Roe v. Wade was overturned today… It is really important that us, together, we get together. We like-minded people talk about s--- that pisses us off … I want you to recognize the power that you have as friends, as family, as brothers and sisters."

Piano house DJ LP Giobbi included graphics into her set with the words "men shouldn’t be making laws about women’s bodies" moving across the screens at the Tripolee Stage.