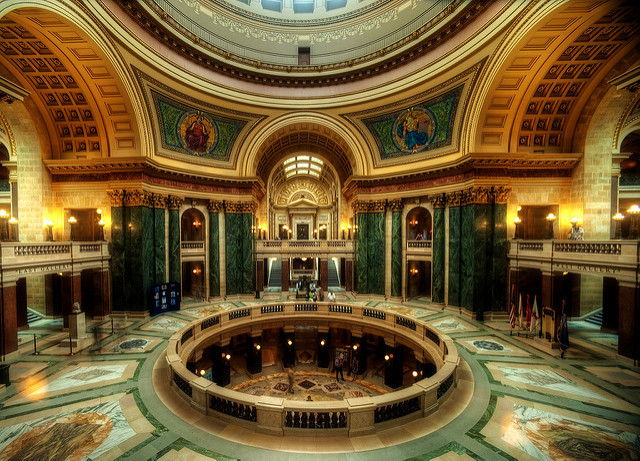 As Election Day Nears, No Ruling Yet In Wisconsin Redistricting Case

A federal court has yet to rule on a lawsuit challenging Wisconsin's Republican-drawn political map despite concluding arguments in the case more than four months ago.

While judges may yet order major changes to the map, the delay makes it increasingly unlikely that they'll act ahead of the Nov. 8 election.

"You just never know when it's going to come," said attorney Gerry Hebert, one of several lawyers who represented a group of Democratic plaintiffs seeking to overturn Wisconsin's map. "I have great confidence in this court's reading of the issues."

"We are confident in the arguments our attorneys have advanced and look forward to learning the court's decision," said DOJ spokesman Johnny Koremenos.

While Wisconsin has seen more than its share of election-related lawsuits in recent years, the case challenging the state's political map is unique, and could carry national implications.

Legislatures get a chance to redraw state political boundaries every decade after the U.S. Census. When one party is in charge of everything, it can draw the map it wants, which is what Republicans did when they took control of state government in 2011.

The redistricting lawsuit in Wisconsin contends that Republicans intentionally gerrymandered the state’s legislative boundaries for partisan advantage and did such an effective job that they violated the constitutional rights of Democratic voters in the process.

Republicans have never relinquished control of state government since redistricting, and experts testified in court that the GOP was "virtually 100 percent" certain to retain its majority in the Wisconsin Assembly under this map, regardless of the political circumstances.

At the heart of the case is a new metric for measuring partisanship called the "efficiency gap," which compares the total number of votes a party receives in legislative races statewide to the total number of seats they actually win in the Legislature. The bigger the efficiency gap, the bigger the gerrymander, and evidence presented in Wisconsin's redistricting trial showed the state had one of the largest Republican gerrymanders ever drawn.

Lawyers for the state argued there's nothing unconstitutional about drawing a map with partisan advantage for one side.

While the U.S. Supreme Court has yet to rule in favor of a partisan gerrymandering lawsuit, justices have shown a willingness to consider such a case if someone can develop a reliable way to measure partisanship. Wisconsin's lawsuit seeks to do just that.

Attorney Hebert, who is the executive director of the Washington, D.C.-based Campaign Legal Center, said his group believes so strongly in the foundation of Wisconsin's case that it's now using the efficiency gap to challenge a Republican-drawn congressional map in North Carolina.

"We used the efficiency gap because we think it's the best test," Hebert said.

The center's Ruth Greenwood, who also represented Wisconsin Democrats in their lawsuit, said the North Carolina lawsuit bolsters their case.

"This adds to our argument that this is a manageable standard that the Supreme Court can set to be used across the country," Greenwood said.

Neither Hebert nor the Wisconsin Department of Justice said they read anything into the court's delay in deciding Wisconsin's redistricting case, though Hebert conceded courts are often reluctant to make major changes to election laws as Election Day draws near.

Hebert said he expects a decision from the court in the next couple of months at the latest. He said he gets dozens of emails every day from the federal court system because of his involvement in cases around the country.

"I always look to see first whether it's Wisconsin or not," Heber said. "So I am anxious about it."