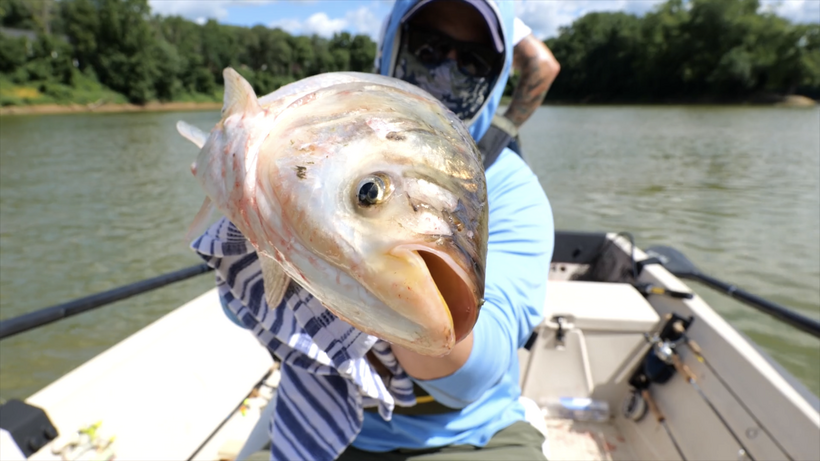 Asian carp like this silver carp are an invasive species that threaten the $7 billion fishing industry and $16 billion recreation boating industry on the Great Lakes.
Photo courtesy of the National Wildlife Federation

Illinois Signs Deal With US Army Corps After Arrangement With Michigan
By Danielle Kaeding
Share:

The U.S. Army Corps of Engineers has signed an agreement with the State of Illinois to begin early work on an $858 million project to prevent the spread of Asian carp into the Great Lakes.

The invasive fish was first introduced to the southern United States in the early 1960s and 1970s, according to the U.S. Fish and Wildlife Service. Asian carp threaten the $7 billion fishing industry and $16 billion recreation boating industry on the Great Lakes. The Asian invader threatens native fish species because they can consume almost half of their body weight in food each day. Signs of the fish have been found just miles from Lake Michigan.

The Army Corps and Illinois signed a preconstruction, engineering and design agreement on Dec. 29 as part of work to install additional defenses to keep the invasive species from getting past a crucial choke point in Joliet, Illinois. The plan recommended by the Army Corps in 2019 calls for additional defenses like noisemakers, a bubble curtain and an electric barrier.

"We're going to roll up our sleeves, and we're gonna work hand in hand with our partners, and with our stakeholders across the country who have an interest in protecting the Great Lakes while maintaining efficient navigation on the Illinois waterway," said Col. Steven Sattinger, the Corps' Rock Island District Commander.

Under the agreement, Illinois is required to pay for 35 percent of engineering and design costs. But, Democratic Gov. J.B. Pritzker had previously made it clear that Illinois couldn't fund the project on its own.

Michigan signed an intergovernmental agreement with Illinois on Dec. 24 to provide $8 million for that initial work. Illinois contributed the remaining $2.5 million needed to fulfill its funding share.

Dan Eichinger, director of the Michigan Department of Natural Resources, said missing the opportunity to reach an agreement with Illinois would have set the project "all the way back to zero."

"We're eager to work together, we're looking to work with our partners from Lake Michigan, the Great Lakes, and in doing so, knowing that we'll always be addressing all the impacts of all the waters involved," said Colleen Callahan, director of the Illinois Department of Natural Resources.

The agreement between the Army Corps and Illinois is a significant step forward, according to Steve Galarneau, director of the Office of Great Waters with the Wisconsin Department of Natural Resources.

"We're extremely excited in Wisconsin, to see this move forward. We've been in partnership with the other Great Lakes states," said Galarneau. "Obviously, Michigan, Illinois — the two there (are) doing the heavy lift here and making this happen, but the other Great Lakes states have been meeting alongside with them on a regular basis for a number of years now. So, it's exciting to get to this stage."

Galarneau said the state isn't signing up for contributing funds to the project at this point, but it hasn't been ruled out.

The National Wildlife Federation celebrated the agreements in a statement on Thursday.

"(T)his agreement shows how the protection of our Great Lakes water, jobs, and way of life is a uniting force across state and party boundaries," said Marc Smith, Great Lakes regional policy director for the group. "Asian carp are truly a national problem requiring this national solution.”

The federal share of the preconstruction, engineering and design work is estimated to be around $18 million, according to Sattinger. Federal funding has not yet been appropriated for that work, which is expected to take three or four years.