Madison-Based Filament Games Has Made Games On Science, Civics, History And More
By Elizabeth Dohms-Harter
Share:

As personal and handheld devices like smartphones, tablets and Chromebooks become more prevalent, the market for educational video games is expanding, says an executive with a Madison-based video game development company.

Jennifer Javornik is vice president of sales at Filament Games, which has produced such games as "Take Off!," "Smithsonian Science," "Scholastic W.O.R.D.," "Saving Lives!," and "Mission to the Mesozoic." Javornik, a founding member of the Wisconsin Games Alliance, said there are demarcations between traditional video games and educational games. Games designed to educate in particular are supposed to foster feelings of confidence, get the users to hone their skills and help them feel engaged.

The goal of the educational games, she said, is that the skills learned there will be transferable to the real world. For example, consider iCivics, an educational project Filament has worked on that was founded by former U.S. Supreme Court Justice Sandra Day O'Connor.

O'Connor believed that games could be a way to educate more people about how government worked and encourage participation in voting. Today, the iCivics platform has more than 21 games available for free on its website.

"Instead of thinking of civics as just information that you read about and consume, all of these games ask you to play an active role in civics," Javornik said.

Video games excel at giving players a chance to succeed in a role they might know nothing about. They, for example, might open up the game "Diner Dash" and be placed in the role of waitress.

"No one fights the identity," Javornik said. "No one says, 'Oh, I don't have the skills to be a waitress.' They're just like, 'OK, what do I need to know to be a waitress?'"

That same approach is used in educational games to allow the players to see themselves as someone who is good at whatever subject the game is immersing them in, she said. Both educational and entertainment games teach basic skills like critical thinking, creativity, collaboration and communication.

And educational games are ideally suited for situations like the pandemic, Javornik said, because they can be played independently without a teacher checking their work. Students also are able to learn as they go, with the game itself explaining how to play as they move along.

Javornik said the goal of the games is to keep the user challenged, but not so challenged that he or she loses hope in the ability to finish or win the game. Then, the game begins to build on those achievements for greater learning.

Filament developers make games that can be played in schools or with a teacher, and often can be played on a browser instead of on a specific device like a Nintendo Switch or a Sony Playstation. Javornik said ensuring economic disparities don't preclude students from accessing content is important.

"We want to make sure that we're creating content that all or most students can enjoy," she said.

Being able to play in a browser, just by typing in the URL and starting the game, is especially important as more schools have adopted Chromebooks as the preferred take-home tool for students. Software can't be downloaded onto Chromebooks — rather, everything has to be done online.

Javornik said Wisconsin is a pioneer of the latest wave of educational video games, particularly because of research done by James Paul Gee, a former University of Wisconsin-Madison researcher who wrote "What Video Games have to Teach us about Learning and Literacy."

Gee observed that video games create worlds of experimentation and spaces where players are encouraged to assume identities outside of themselves. They're challenged with failures and motivated to think critically.

Businesses like Filament, Javornik said, took the philosophy and ran with it. 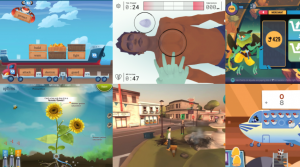 Building robots, running for president and traveling back in time to photograph dinosaurs are all things students can now do through video games. But there’s a catch: These games are educational. A guest helps us explore the expansive world of educational video games.