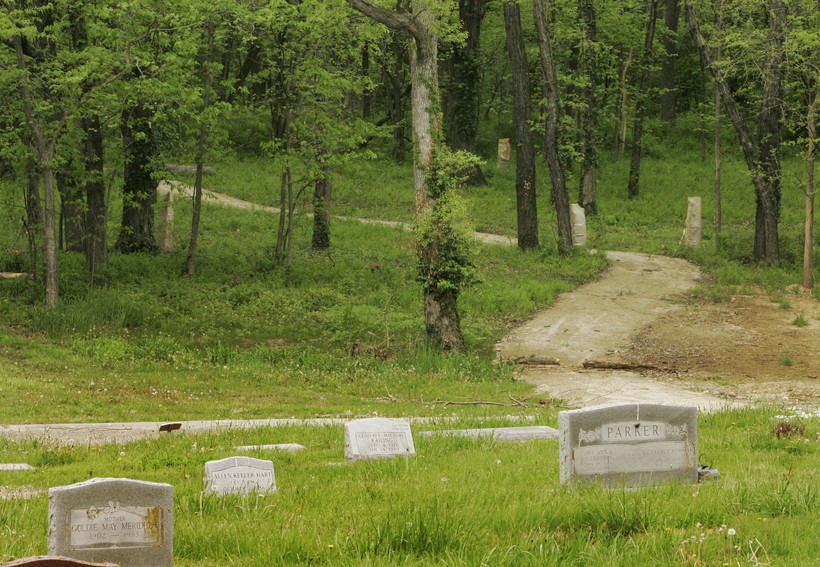 A path leads to the area set aside for "green" burials at Oak Hill Cemetery in Lawrence, Kansas. Orlin Wagner/AP Photo

Options for green living extend to the afterlife.

Green burials, an ever-growing option among those looking to reduce their carbon footprint and save money in the process, focus on natural burial methods instead of embalming and treating the body with chemicals to preserve it.

In green burials, bodies are buried with natural, biodegradable material so they decompose into the dirt instead of being buried in a concrete box or steel grave liner.

The National Funeral Directors Association reported in 2017 that more than 50 percent of respondents to a consumer survey said they're interested in green funeral options, an option seventh-generation mortician Elizabeth Fournier details in her book, "The Green Burial Guidebook."

Fournier, owner and operator of Cornerstone Funeral Services in Boring, Oregon, said what is now considered a green burial was actually common practice before the Civil War. She said women as "layers of the dead," used to prepare their loved ones by bathing, dressing and singing to them before putting the bodies in the funeral parlor in the front room of the house.

After the Civil War, when men's bodies needed to be returned home for services, embalming became common practice, and it helped usher in the era of funeral homes.

"We had goods and services, and basically everything progressed, where taking care of the nature and doing things simple sort of regressed," Fournier said.

While cremations may seem like eco-friendly options and have gained popularity, especially among the Baby Boomer generation, they're not green, Fournier said.

Cremations are expected to increase from about 50 percent in 2016 to nearly 80 percent in 2035, according to the National Funeral Directors Association. That means an expected 2.8 million dispositions would be by cremation, up from 1 million in 2010. In Wisconsin in 2018, 33 percent of dispositions were burials and 61 percent were cremations, the report shows.

But cremations produce fossil fuel waste. One cremation can emit 880 pounds of carbon dioxide and other pollutants, such as mercury. Moreover, the energy used to perform a cremation is equivalent to a 500-mile car trip, Reuters reported. Starting the afterburner, or crematory, to get the temperature up to 1,800 degrees Fahrenheit to cremate a body is an example of where high energy use is required.

There are other options to dispose of human remains — for example, aquamation, or alkaline hydrolysis, dissolves human remains and leaves the bone, which can then be crushed into ash.

"We're really broadening our parameters of what we can do to keep it eco-friendly," Fournier said.

But that option is technically legal in 13 states, and Wisconsin isn't one of them.

According to the Funeral Consumers Alliance, the cost for green burials varies by the type of site. A grave site and the burial ceremony can cost from $1,000 to $4,000 for a body. The cost is less, from $200 to $1,000, for cremated remains. The cost could increase with additional funeral home prices, with some charging more than $5,000 for a green burial with a pine casket, according to the alliance.

"A price of about $2,000 is more typical, though still high," the website states, noting that consumers should see comparable prices for green burials and direct burials, which are often the most affordable option. "Shop around among several funeral homes to find the most affordable price."

Family members and loved ones can save money by building caskets themselves. Green materials include plain wood, cardboard or wicker. Wrapping the deceased in a favorite blanket or quilt made from natural materials such as cotton or wool are also options.

"A shroud doesn't have to be something that somebody hand-sewn or you bought off the internet," Fournier said. "This can be a piece of material from the fabric store."

People interested in green burials should first decide where they want to be buried, Fournier said, noting that Wisconsin has several sites devoted to green burials or that include space for green burials among the more modern cemetery setting. It's also legal for people to bury their loved ones on their own land, but people should check with their local ordinances for details on what would be required to do that.

"Wisconsin is one of those fantastic states that is really open to traditional burial and modern burial and just making people have as many choices as possible," she said.

Also, families should be notified if someone is interested in a green burial for themselves.

"It's important that you discuss with your family what you want and if you do want a green burial, is everybody on board," Fournier said.

She said families need to establish who will be driving the body to the burial site, how the loved one will be buried and what to do if the burial happens quicker than expected or during the winter when the tundra is frozen.

"Things sometimes happen," she said. "Be easy on yourself because sometimes your family or whomever just can't make it happen, an that's just OK."