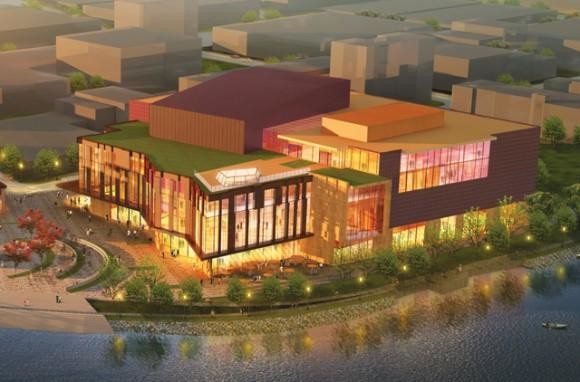 Above, images of the proposed downtown arts center.

The Confluence Project is comprised of two buildings, one with three theaters and the other with student housing and retail space, that would rise from the shores of where the Eau Claire and Chippewa Rivers meet downtown.

Discussions had been ongoing for two years, but when the city proposed spending around $11 million on the project, things began to heat up. Signatures were collected and a referendum question asking whether voters should decide the fate of any city arts project worth $1 million was put on the ballot.

Ben Richgruber directs the Eau Claire Regional Arts Council and says requiring a referendum prior to city spending on the arts would set bad precedent. “It’s very dangerous,” said Richgruber. “Not only does it change the way that we govern but it singles out the arts in a very unfair fashion, and even if Confluence doesn’t move forward, it means referendum after referendum.”

The county board also put a question on today's ballot asking if voters support giving $3.5 million to the Confluence. A citizens group called Voters with Facts has said local government shouldn't even be involved in the project. Member Bob Von Haden, who also sits on the city council, says the performing arts center isn't needed and puts taxpayers on the hook if it loses money.

“Everybody is talking about what this arts thing is going to do to the future and all of this phenomenal growth,” said Von Haden. “It’s already here.”

Supporters expect the Confluence project will survive even if voters turn down funding, but it could impact a potential $25 million contribution from the University of Wisconsin System.