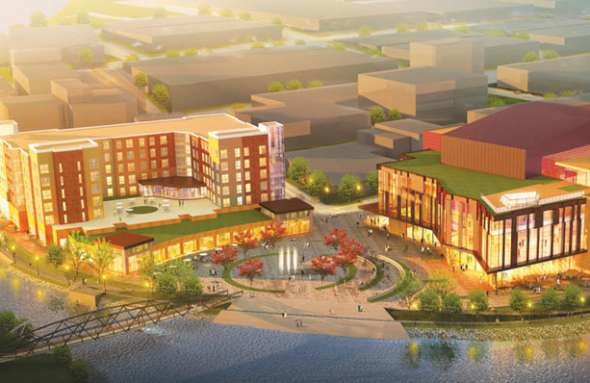 The Wisconsin Department of Justice's solicitor general is warning a lawsuit challenging an economic development project in Eau Claire could "imperil" the $10 billion Foxconn complex in Racine County and other ventures in the state.

The state wants in intervene in a 2015 lawsuit filed on behalf of a group of Eau Claire taxpayers calling themselves "Voters With Facts," who say the city abused Wisconsin's tax incremental financing law that includes cash payments to a private developer or company. It has to do with around $1.5 million in cash payments to developers related to the Confluence Performing Arts Center and mixed-use building in Eau Claire's downtown.

The conservative-leaning Wisconsin Institute for Law and Liberty is representing Voters With Facts. WILL President Rick Esenberg said no matter how the Wisconsin Supreme Court rules on the matter the Foxconn project will not be "imperiled."

"It does seem to me that the attorney general may be making a bit too much out of this in the sense that the amount of money that would be involved with respect to these payments from the TIF district is a very, very small percentage of this $3 billion Foxconn package," said Esenberg.

DOJ Solicitor General Misha Tseytlin said if the court were to side with the plaintiffs, it "would imperil numerous projects critical to Wisconsin's economic growth, including the Village of Mount Pleasant's recent agreement with Foxconn Technology Group." That project includes $100 million in cash incentives.

Eau Claire City Attorney Stephen Nick has defended the city in the lawsuit and said he's pleased the state is joining in supporting TIF districts. He said the case has big implications for many Wisconsin municipalities.

The state Supreme Court is scheduled to hear oral arguments in the case Feb. 23.

Editor's Note: This story was updated at 4:45 p.m. Friday, Dec. 8 with original reporting from WPR.