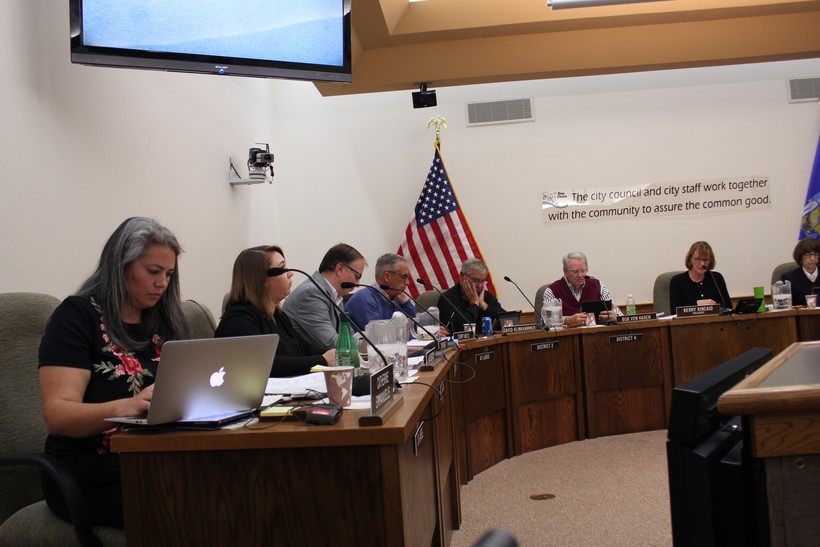 Eau Claire City Councilwoman Catherine Emmanuelle, left, says a resolution blocking children from the dais where members sit is really an attempt to keep her from breastfeeding her son at her council seat during meetings. The council voted Tuesday Oct. 24, 2017, to ban young children from sitting with the city council at the raised dais.
Rich Kremer/WPR

Councilwoman Claims It's An Illegal Attempt To Keep Her From Breastfeeding Son At Her Seat During Meetings
By Rich Kremer
Share:

The Eau Claire City Council has voted to ban young children from sitting amongst council members. But one councilwoman calls the resolution an illegal attempt to keep her from breastfeeding at her desk during meetings.

The resolution passed Tuesday night bars anyone other than council members from the raised dais where the council sits.

The vote comes after councilwoman Catherine Emmanuelle pushed to breastfeed her son at her seat during council meetings.

For the past several months Emmanuelle has fed her son in the public seating area, a location she said hinders her ability to work with the city council and be face-to-face with public speakers. Emmanuelle's frustrations were explained in a letter dated Oct. 9 and sent to the city council president from Emmanuelle's attorney.

The resolution was framed as an attempt to formally establish council decorum and not allow anyone but council representatives from sitting at the dais.

But Emmanuelle said she doesn't buy it.

"I have a really hard time believing that any of this resolution is anything but an illegal end run of keeping me at my legally protected seat to breastfeed my child when I need to be on the dais," Emmanuelle said.

The resolution passed with a 7-1 vote after a lengthy heated debate. Three members, including Emmanuelle, abstained from voting.

During the meeting, several of the members who voted in favor of the resolution cited concerns about children distracting them from official city business.

Council President Kerry Kincaid said she and Emmanuelle had an agreement that was working. She said Emmanuelle was allowed to fully participate in council proceedings while sitting in the public seating area.

"She was here, she voted and she just didn’t sit up on the dais, and it was my perspective that she served her citizens well during that time, and also in work sessions her child has accompanied her whenever she had that need," Kincaid said.

State statute says a mother may breastfeed her child in any public or private location where both are authorized to be.

But Eau Claire City Attorney Stephen Nick has affirmed the council's authority to establish rules of order and decorum in the chambers.

"This authority is sufficient to determine whether a member may bring others, namely children, with them to the dais," Nick said.

After the meeting Emmanuelle said she and her attorney will be exploring her options.