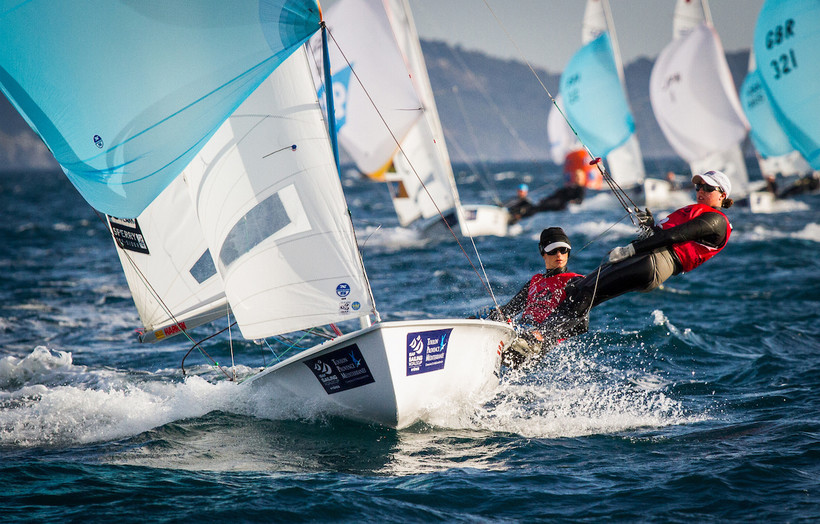 Annie Haeger and Briana Provancha compete in the Women's 470.

Sailing is a constant battle with Mother Nature. Between the weather and the waves, sailors have to be ready for anything they plunge into. These are situations U.S. Olympian Annie Haeger says she mastered on a small lake in southeast Wisconsin.

"There’s a tiny little lake in East Troy called Lake Beulah," said Haeger. "My dad’s side of the family has been living on the lake for five generations now. It’s quite fun, you can see my 80-year-old grandpa on the sailboat on the weekend."

And now, the Wisconsin native will be sailing in Rio de Janeiro’s Guanabara Bay at the Summer Olympic Games. Haeger is competing in the Women’s 470 with her teammate and fellow Boston College alumna, Briana Provancha. The 470 is a two-person dinghy, a type of sailboat that’s 4.7 meters long. Haeger is the skipper on the team. "The skipper is the person in the back of the boat that steers the boat and handles the cockpit, which has all different kind of control lines for the boat," she explained. "So, my job is more finesse where Briana’s job is a bit more straight power, little bit physical. She’s in the front of the boat called the crew and she has the jib, which is the smaller sail."

In Rio, Team Haeger/Provancha will sail 10 races in the shape of a trapezoid.

"You can think of sailing a course similar to a NASCAR race," said Haeger. "There’s a particular course you have to go around and the person who crosses the finish line first wins. Unlike NASCAR, it’s not dependent on time. It’s dependent on which place you received in the race. The person which finishes first gets one point, second, two points, and so on. At the end of the regatta, there are 10 races. Whoever has the least number of points wins."

With each race, the teams will alternate between sailing inside and outside Guanabara Bay.

"Inside the bay, there are crazy currents, the wind is shifty, it’s flat water and there’s a lot of unpredictable unknowns there," said Haeger. "Outside the bay, the 12-foot waves are absolutely massive. It’s more about boat speed and technique."

And Haeger said that’s good for her and Provancha. They’re strong through all types of conditions.

"If we can be mentally stable, not do anything special, stay status quo, we’re going to be on that podium," Haeger said.

The team has spent a lot of time training in Rio over the last couple years. For three weeks at a time, they fill their days practice racing, working out, and working on their boat. Haeger said she wouldn’t have it any other way.

"Sailing is where I chose to put my passion. I’m very competitive," she said. "I can go out there and not only lose myself, but find myself at the same time. It’s made me figure out what I do when I’m really stressed out and how I calm down as a person."

In the four years she’s been working toward the Olympic Games, Haeger said she’s discovered not only who she is as a person on the water, but also as a best friend to Provancha.

"We’ve been successful, but hope all the hard work will come to fruition in a gold medal."