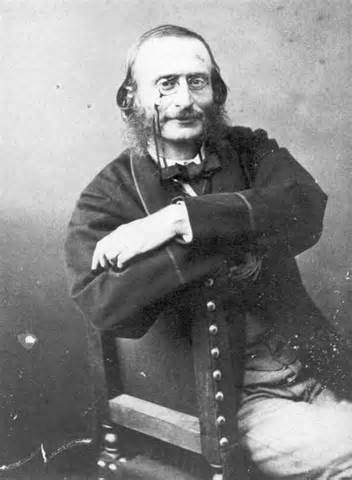 From the Earth to the Moon

It was an extremely popular subject--science fiction.  The music was by France's leading operetta composer, Jacques Offenbach, and the story by the father of science fiction, Jules Verne.  The French stage had never seen anything like From the Earth to the Moon.

The Franco-Prussian War of the 1870's had demoralized France, and the country was looking for new hope.  The leading thinkers looked to science.  One writer remarked that bright, gas-lit streets and wide traffic arteries had done more to cut crime than any moralizing could.  Technology had become the fascination of France.

The extravagant pantomime Le Voyage dans la lune delivered it in spades. The producer had a large, state-of-the-art  relief model of the moon erected in floodlights on the theatre facade.  The first act of the pantomime featured the enormous gun that shoots the lunar travelers skyward.  The gun was so huge that it rested on mountains and stretched across valleys, towns and rivers.

The scenery for the second act was just as fantastic.  It was the lunar landscape, and it included a tobacco plant that burst into bloom in seconds.

[All of that was topped in Act Four.]  Just as the lunar travelers were sentenced to hard labor in the interior of the moon, there was a peal of thunder, the ground quaked, lava flowed and flames rose up all around.  One of the travelers took refuge in a gigantic rock, which was then struck by a ball of fire and flung into space.  Ashes came raining down and the burned-out crest of the volcano came into view, then the earth, growing larger and larger until it filled the entire sky.

[The plot?  There was one,  though it must surely have been upstaged by the special effects.]  As for Offenbach's music, it did its share to draw in the crowds and keep them happy, the most notable exception being Jules Verne himself, who was not amused, and considered suing Offenbach for stealing his idea.