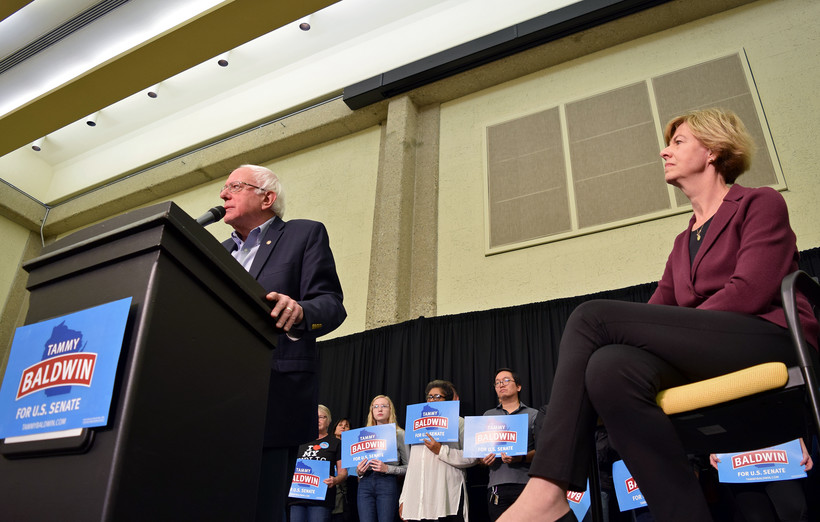 U.S. Sen. Bernie Sanders of Vermont campaigns for U.S. Sen. Tammy Baldwin and the rest of the Democratic ticket at UW-Milwaukee in front of hundreds of attendees. Ximena Conde/WPR

Vermont Sen. Bernie Sanders — a progressive icon — spent Monday morning stumping for the Democratic Party at the University of Wisconsin-Milwaukee.

Sanders is one of several prominent politicians visiting Wisconsin this week including President Donald Trump on Wednesday and former President Barack Obama on Friday, just two weeks before the Nov. 6 election.

The independent senator and 2016 presidential candidate, who won the Wisconsin primary, was joined by U.S. Sen. Tammy Baldwin, gubernatorial candidate Tony Evers and other Democratic candidates.

He also called on young people to vote in the midterms, encouraging them — once they vote — to walk family members and co-workers to the polls.

"If each of you do that, that 1,000 votes that are here this afternoon suddenly becomes 4,000 votes," said Sanders.

He also used the platform to tear into Trump’s policies.

Sanders ended by criticizing Trump for what he characterized as efforts to divide the country.

"This country has struggled with discrimination, and racism, and sexism and homophobia for too long," said Sanders. "Mr. Trump we are not going backwards, we are going forwards."

Each candidate took turns slamming Republican efforts to repeal the Affordable Care Act and stressed the importance of protecting those with pre-existing conditions.

Evers also took a moment to tout his plan to give a 10 percent tax break to Wisconsin’s middle class families.

"'Cause those are the people who have been struggling all along under Scott Walker," Evers said of Wisconsin's Republican governor to a roaring crowd.

Baldwin, who is facing a challenge from state Sen. Leah Vukmir, slammed GOP tax cuts that passed earlier this year.

"She wants to pay for this new tax law — get this — by putting Social Security, and Medicare and Medicaid on the table," said Baldwin.

In a statement, the Republican Party of Wisconsin accused Baldwin and Sanders of wanting to put Washington bureaucrats in charge of Wisconsinites’ health care.

"Tammy Baldwin and Bernie Sanders’ extreme-liberal record is out of touch with our state," said Alec Zimmerman, spokesman for the Republican Party of Wisconsin. "When it comes to fixing health care, we need to send a nurse like Leah Vukmir to bring our Wisconsin way to Washington."