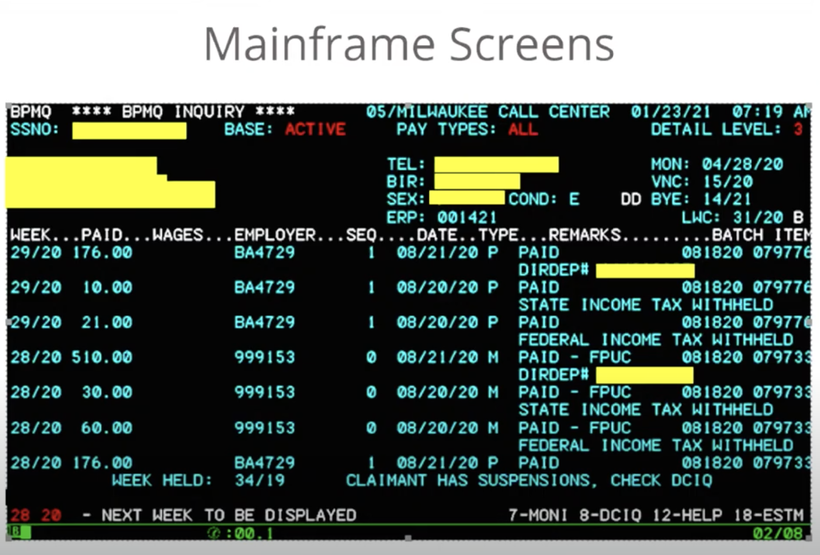 A screenshot of the Wisconsin Department of Workforce Development's "mainframe screen," one of more than 100 different screens DWD staff use to process unemployment claims in the department's aging computer system. Screenshot from Gov. Tony Evers' YouTube channel

The state Department of Workforce Development (DWD) renewed calls Wednesday to modernize Wisconsin's unemployment system, showing in great detail the facets of the agency's computer system that slow down the pace of claims processing.

In a nearly hour-long briefing, department officials walked through the complicated and antiquated system used to process benefits, sharing screenshots of computer systems used by DWD staff that were reminiscent of early computers from a pre-internet era.

"I had heard anecdotally about the antiquated systems but I have to admit, I truly did not understand what DWD was dealing with until I got here," said DWD Secretary-designee Amy Pechacek, who joined the department in September after Gov. Tony Evers ousted former Secretary Caleb Frostman. "Now we work in government, so no one expects the government to have the latest and greatest in any technology, but what DWD has been working with was a complete shock."

In the demonstration, officials showed how one relatively simple issue can drastically slow down an unemployment claim, creating multiple additional steps for DWD staff to finish processing. Multiple systems are used that the department described as not intuitive, creating a steep learning curve for new staff being brought on to deal with the massive spike in claims the department has seen throughout the pandemic.

The briefing comes as out-of-work Wisconsinites continue their weeks-long wait for two new sets of unemployment benefits. In the second round of federal coronavirus relief, Congress allowed unemployment recipients to claim an extra 11 weeks of benefits under two programs: Pandemic Unemployment Assistance (PUA) for self-employed and contract workers, and Pandemic Emergency Unemployment Compensation (PEUC), which extends the amount of time someone can receive unemployment.

DWD officials said in a briefing before the state Senate Wednesday that they expect new PEUC benefits to be deployed in the first week of March. The department has not released a timeline for when PUA benefits will be available and has not responded to multiple requests for comment from Wisconsin Public Radio about when they'll be finalized. Both sets of benefits were signed into law Dec. 27, meaning as of Wednesday, jobless Wisconsinites have been waiting a full month without aid.

That lack of information has angered many unemployment recipients, according to interviews and multiple posts on online unemployment support groups. Many recipients are dealing with increasing strain to their finances while they go without benefits.

DWD officials said the Evers administration began efforts to modernize the system in 2019, conducting demonstrations with potential vendors to see different visions for an updated system.

Through the process, DWD compiled a list of seven things that need to be done to update the unemployment system software. Those include things like providing near 24/7 customer service, enabling electronic communications for recipients and employers, automation of multiple processes that currently require manual work, and a system that allows for the ability to set up unemployment policy changes quickly and easily.

The department estimates that the upgrade could cost $90 million and take years to complete.

"Ultimately, this is the necessary solution to provide better, faster services to future claimants and improve the (unemployment) system's ability to respond to future recessions," Pechacek said.

Evers called the state Legislature into special session on Jan. 19 to modernize the unemployment system. Republican state lawmakers declined to take up any policy changes, instead saying Evers has the ability to update the system on his own.

In a release announcing the briefing Tuesday night, DWD pointed to the Legislature's inaction.

In a statement to WPR, Republican Assembly Speaker Robin Vos, R-Rochester, again argued that Evers has the power to update the unemployment system himself.

"This morning’s briefing showed the very real need to modernize the unemployment insurance system and I hope the governor was watching," Vos said. "His administration should get to work fixing this issue using any one of the available avenues outlined by the non-partisan Legislative Fiscal Bureau."

Evers has argued the changes would require legislative action from state lawmakers.

Senate Majority Leader Devin LeMahieu, R-Oostburg, did not respond to a request for comment.