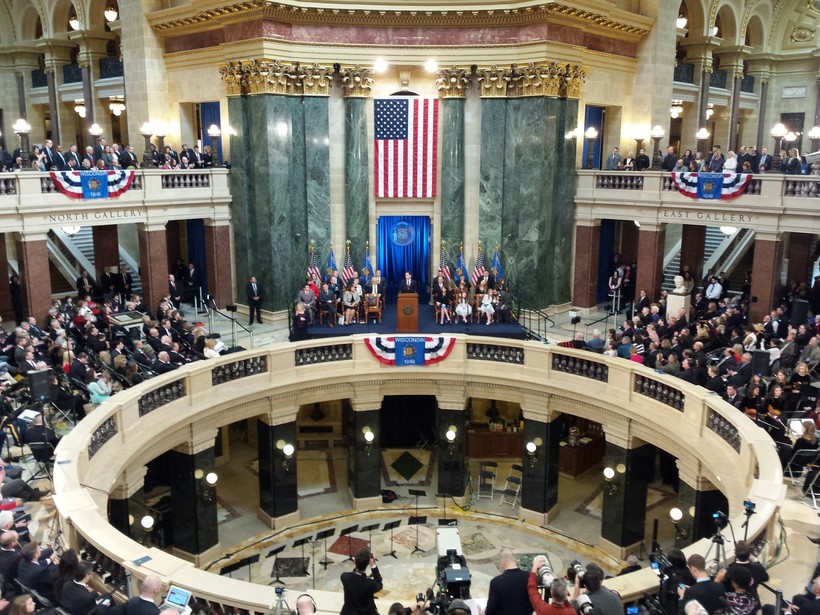 The inauguration ceremony in the Capitol on Monday. Photo: Shawn Johnson/WPR News.

Gov. Scott Walker used his inaugural address on Monday to tout his record in Wisconsin and draw a contrast with the federal government as he considers a run for president.

At Walker's first inauguration four years ago, he emphasized the need for frugality and moderation in government — a nod to the budget deficit he'd inherited upon taking office. There was little mention on Monday of a new budget deficit Walker helped create, and the governor's emphasis shifted from frugality to freedom.

“In Wisconsin, we understand that true freedom and prosperity do not come from the mighty hand of the government,” he said. “They come from empowering people to control their own lives and their own destiny through the dignity that is born from work.”

Walker's inauguration ceremony was as grand as they come, with multiple stages in the Capitol rotunda and several warm-up music acts from throughout Wisconsin. The giant American flags hanging from the capitol's balconies hinted at the governor’s national ambitions, as did his remarks.

“There is a clear contrast between Washington and Wisconsin,” said Walker. “We have been good stewards of the taxpayer's money and lowered their tax burden as well. We've shown why the founders of this great nation look to the states and not the federal government as the source of hope for this exceptional country. We will not let them down.”

Without getting specific, Walker alluded to his landmark Act 10 collective bargaining law, which he introduced about a month after his last inauguration. The governor also highlighted tax cuts he’s pushed through.

“In contrast to the politicians along the Potomac, we get things done in the Badger state,” said Walker.

Walker spoke generally about his agenda for the upcoming term, hinting at a likely expansion of Wisconsin's private school voucher program. He also alluded to the upcoming debate over Wisconsin's transportation budget, suggesting without any specifics that he would prioritize funding for roads.

“"We will build the needed infrastructure to support a thriving economy, a transportation system to support major industries like manufacturing, agriculture, forest products and tourism as a key part of this infrastructure."

While it was not front and center in this speech, the governor did talk about cutting government, saying he would reduce the size and scope of government to match the will of the people. Walker will have larger Republican majorities to help him, especially in the state Assembly, where Speaker Robin Vos was also sworn into another term as leader.

“It's time to ask ourselves some tough questions. How much government do we really need as we position ourselves in the global economy?” said Vos.

Assembly Minority Leader Peter Barca said he was worried Walker's presidential aspirations would take his attention away from Wisconsin and that Walker's plans to restructure government could be harmful.

However, Barca said there could be also be a good side to Walker running for president.

“You know, I'm not so sure this country wants a president that would be polarizing,” said Barca. “In fact, I think it suggests just the opposite. So maybe that will make him try to not be as polarizing as he was in his first term. That would be my fondest hope.”

Barca and other Democrats called on Republicans to work with them, but for the third session in a row Walker and GOP lawmakers are in a position where they don't need to work across the aisle to run state government.