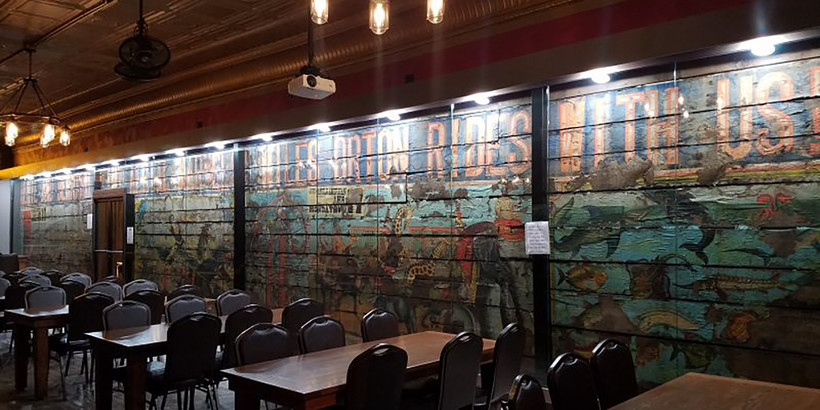 Wisconsin Renovation Project Discovers — And Preserves — A Mural That Was Covered For More Than A Century
By Brady Carlson
Share:

A few years ago, Ron Berger was doing a renovation at his family's restaurant, the Corral Bar and Riverside Grill, in Durand, southwest of Eau Claire.

As he pulled back a part of the dining room wall, he spotted something that hadn't been seen in over a century.

It was "a humongous lithograph print, which was essentially a billboard for a traveling circus that was visiting Durand in 1885," said Evan Nicole Brown, who reported on Berger's discovery for the travel website Atlas Obscura.

"The first thing that Ron saw when he pulled back the wall was a little bison peeking out from behind the hole in the wall he had broken into. He followed that further and further behind the wall, and he opened up the wall to a humongous, 9 foot high, 55 foot long, full color circus poster. It was pretty incredible."

The circus the mural advertised was known as the Great Anglo-American Circus, highlighting its owner and star, Miles Orton.

Brown said it's still not definitively known how the poster got on the wall, but it may have been put up on the walls of the building before it was fully constructed — that way, it might have been seen by passersby on the nearby Chippewa River.

What is known, she said, is that the poster wasn't meant to last as long as it has.

"This would have probably been up for a maximum of a month or two after the circus had passed through Durand," she said. "It was meant to disintegrate after a couple months."

But after Berger found it in 2015, he decided to preserve the mural.

"He did a lot of historical research and a lot of circus history research, particularly in and around Wisconsin, to figure out what the significance of this poster was, to even see if it was worth his time and money," Brown said.

After more than two years of work, Brown said the mural is on full display.

"It's now behind glass," she said, "because they did research and they realized that people would want to touch it, which is understandable because it's so incredible."