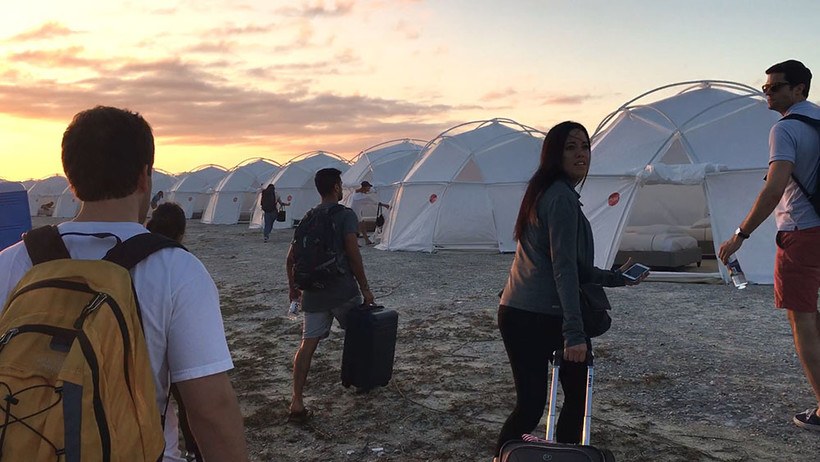 Attendees of the Fyre Festival in Great Exuma, Bahamas. Photo courtesy of Netflix

Chris Smith’s Netflix Documentary Takes Aim At 1 Of The Greatest Frauds Of The Century
By Adam Friedrich
Share:

In April 2017, anyone with a social media account was likely aware of the real-time meltdown of the Fyre Music Festival set in Great Exuma in the Bahamas.

Billed as an extravagant, once-in-a-lifetime event that was to be populated with top musical acts, supermodels, influencers, luxury accommodations and fare, attendees who paid top dollar to travel to the "exclusive" fest were treated to canceled performers, zero celebrities, FEMA tents and cheese sandwiches.

Conceived as the brainchild of Fyre Media CEO/entrepreneur Billy McFarland and hip-hop mogul Ja Rule, the fest was to be the biggest promotional event ever to launch their new talent booking app, Fyre. It ended up imploding with thousands of angry attendees and hundreds of thousands of dollars of debt.

"They sold and marketed this luxury festival in the Bahamas on a remote island and it was something that everyone bought into and believed in and wanted to experience," said Wisconsin filmmaker Chris Smith. "The reality was just something totally different."

Smith directed the new Netflix documentary, "Fyre: The Greatest Party That Never Happened." Featuring interviews with dozens of former Fyre employees, contractors, local Bahamians and attendees, the film offers a comprehensive look back at one of the most high-profile frauds in years.

McFarland and Ja Rule made several trips to the Bahamas to attempt to plan the fest. They created a marketing campaign using supermodels and major social media influencers to generate buzz and enthusiasm. "They had some of the top models — Instagram models, runway models — that they had brought down and were able to create this façade. It was incredibly well done for the target audience that they were going after," said Smith.

The trouble was they were now the dog that caught the car and had to actually pull off the improbable feat of providing what they promised.

Seth Crossno was an attendee featured in the film. He said his arrival to the fest mirrored basically everyone else’s in the sense that it was completely disorganized and immediately clear that they had been sold a bill of goods.

"Finally, Billy stood up on a table and told everybody 'Go grab a tent' and that created a free for all that was pretty chaotic and then if you had luggage, you had to go try to find that and it was getting pretty dark outside," Crossno said in the film.

The impact on the local Bahamian community that had worked relentlessly on the promise of future big pay days was dire. The film focuses on the plight of Maryanne Rolle, a Bahamian restaurateur, who drained her personal savings in excess of $50,000 to feed local workers and contractors who were laboring to build the fest with the understanding that she would be reimbursed afterwards. "I don’t think it was an unrealistic expectation based on the perception of Fyre in the Bahamas. There was a lot of celebrity, a lot of noise," said Smith. "So, I think that everyone just felt like it was so chaotic because there was so much to do and that everything would work out once the festival had gone off."

"I don’t even like to talk about the Fyre Festival. Just take it away and just let me start a new beginning, because they really, really hurt me," Rolle said in the film.

"We did try to interview Billy (McFarland.) We were set up to film Billy once or twice and in the end Billy came back to us and said he wanted to get paid. He said he was being offered $250,000 from another production," Smith said.

The other production was a competing documentary, "Fyre Fraud," produced by the streaming service, Hulu. Smith said he has no interest in seeing that documentary given that he has lived the story for the past year, but he did respond to a small bit of controversy raised in the Hulu doc.

The Hulu doc challenged the ethics of Smith’s film because "Fyre" was produced in partnership with Jerry Media, which is the social media agency that helped promote the festival in 2017. Smith admits to collaborating with a lot of people and firms that worked with Fyre Media and said it was the best way to get the inside story.

Crossno, who was part of a $5 million settlement, said that as McFarland was awaiting sentencing for defrauding Fyre Media investors, he began another scheme of selling tickets to exclusive events like The Masters golf tournament and the Met Gala through a shell company using the email list of Fyre Festival attendees.

"He convinced a number of people to give him over $100,000 for these tickets that didn’t exist, so he got charged with that as well," Crossno said.

McFarland is serving a six-year sentence with a three-year probationary period.