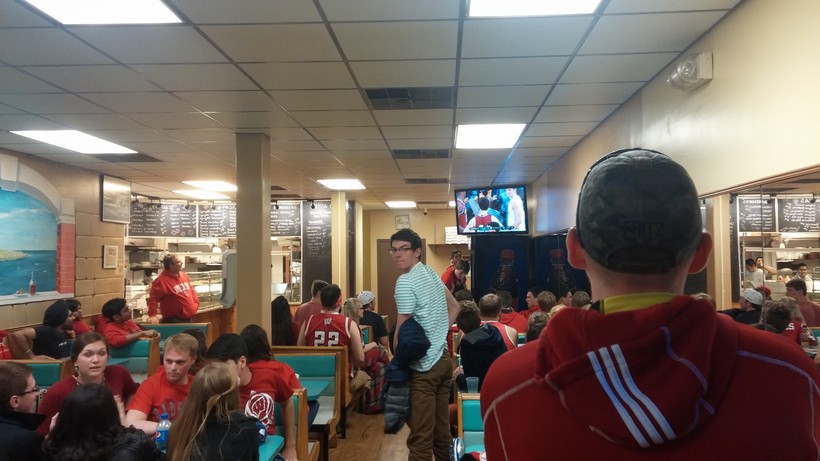 Badgers fans watch some of the final moments of the NCAA championship game in a Madison pizzeria on Monday night.

The Badgers and Blue Devils were engaged in a seesaw battle for most of the game. The teams completed the first half tied and exchanged the lead more than a dozen times.

The Blue Devils took the lead for the first time since it was 29-28 on a three-pointer by Grayson Allen, who came off the bench to score 16 points. After the Badgers regained the lead on back-to-back baskets by Frank Kaminsky and Sam Dekker, the Blue Devils stormed away.

Jones started it with a basket, and Okafor — mired in foul trouble all game — returned to the floor to score the next two hoops. By the time Jones knocked down a three-pointer with 1:10 to go, the Blue Devils had pushed their lead to 66-58 and the celebration was starting in the stands.

Wisconsin tried to foul its way back into the game in the final minute, but Jones added two more free throws with 34.9 seconds remaining to seal the victory.

Jones and Okafor have known each other since playing for USA Basketball, and decided together to attend Duke. Their goal was to win a national championship. Now, they have it.

Kaminsky, the Associated Press player of the year, finished with 21 points and 12 rebounds for the Badgers, who had been seeking their first title since 1941. Dekker added 12 points and eight boards.

The Badgers finish the season with a 37-3 record.

The Badgers had bested the undefeated University of Kentucky Wildcats to earn a slot in the championship. Duke defeated the Michigan State University Spartans earlier on Saturday.

Monday’s matchup between the Badgers and Blue Devils might have struck many court watches as a surprise after a season that was dominated by discussions about Kentucky's pursuit of perfection.