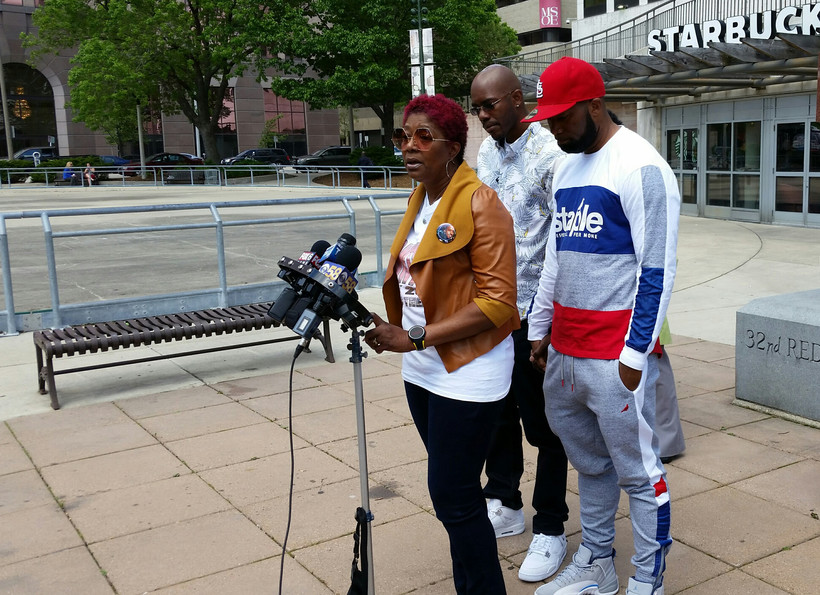 Dontre Hamilton's mother, Maria Hamilton, discusses the financial settlement at a news conference May 31, 2017, in the downtown park where Dontre Hamilton was shot in 2014.

Spokeswoman: Mayor To OK Settlement For Black Man Killed By White Officer
By Chuck Quirmbach and The Associated Press
Share:

The family of the black man fatally shot by a white police officer in 2014 says they're not done pursuing justice after a $2.3 million financial settlement was approved Wednesday by the Milwaukee Common Council.

At a press conference Wednesday, the mother of Dontre Hamilton, the mentally ill black man fatally shot by the white police officer in a confrontation in a downtown park, said the settlement is not a victory or the justice her family wanted, but she said it will help her grandchild in the future.

"Dontre has an heir, and hopefully this settlement will give him a better life," Hamilton's mother, Maria Hamilton, said at the press conference in the downtown park where Dontre was shot in 2014.

The lawsuit was brought on behalf of the son of 31-year-old Dontre. After legal fees, the remainder of the settlement will be placed in a fund for the son that he'll receive when he becomes an adult.

A spokeswoman for Milwaukee Mayor Tom Barrett says he's expected to sign the settlement. Spokeswoman Jodie Tabak made the comment hours after the city's Common Council unanimously approved the settlement. Maria Hamilton holds a photo of her son Dontre Hamilton, who was fatally shot by a Milwaukee police officer in April 2014, at her home on Monday, March 30, 2015 in Milwaukee. Carrie Antlfinger/AP Photo

At the common council meeting Wednesday, alderwoman Milele Coggs spoke in favor of the agreement, casting her "yes" vote "in recognition of the fact that black lives do matter, and that there is no dollar amount that will ever replace Dontre or any of the long list of other names that exist on the list of people who died at the hands of police officers across the nation," she said.

Several other members of the common council also endorsed the settlement.

One alderman, Bob Donovan, abstained from voting. He said many police officers tell him the firing of the police officer who shot Hamilton was an effort to avoid racial unrest.

Officer Christopher Manney was responding to a complaint of a man sleeping in the downtown Milwaukee park when he encountered Dontre. Manney said Dontre attacked him as he frisked him for weapons. Manney shot him 14 times and claimed self-defense.

Manney was fired for violating department rules when he encountered Hamilton, not for the fatal shooting.

Dontre's family later sued the city over his death.

The Hamilton family will work to hold other law enforcement accountable in other officer-involved shootings, Maria said Wednesday. She also urged more people to push for change and become a voice for what she called "stolen lives."