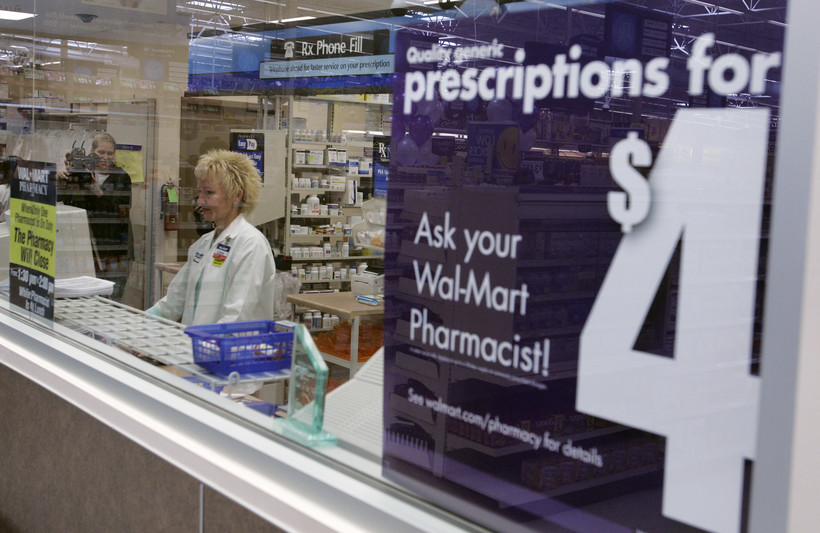 Pharmacist Karen Kalies, center, has her photo taken as she works at a Wal-Mart pharmacy in Oklahoma City, Thursday, Nov. 16, 2006. Wal-Mart Stores Inc. expanded a $4 offer for some prescription generic drugs to 11 more states Thursday, including Oklahoma, in its plan to reach all 50 states by as early as January with the discount program. AP Photo

The high cost of pharmaceuticals has gotten the attention of everyone from the president to doctors and lawmakers. But all have different answers on how to help patients afford the drugs they need.

President Donald Trump wants to tie certain Medicare drug prices to lower prices in other countries. U.S. Sen. Tammy Baldwin announced Wednesday that she and U.S. Sen. Amy Klobuchar, a Democrat from Minnesota, are reintroducing a bill that would allow Medicare to negotiate drug prices with manufacturers, like the U.S. Department of Veterans Affairs is able to do.

But the bill faces high hurdles and Trump’s plan is getting pushback from some in his own party.

With no immediate federal relief on the horizon, physicians in Wisconsin are trying to ease the financial burden for patients.

The Wisconsin Medical Society is touting a prescription savings card offered by United Networks of America in both Wisconsin and other states. The Wisconsin Drug Card is free and has been available in the state since 2010. Doctors worry that when prescription prices are out of reach, people sometimes split pills or go without.

"That really happens. When I was practicing it would happen to me," said Society President Clyde "Bud" Chumbley, who was a doctor in Texas before moving to Madison. "A couple times I would go buy the medication for a patient because they weren't going to get well without it."

The Wisconsin Drug Card — which is privately supported — isn't insurance. There’s a disclaimer on the United Networks of America's website noting the drug discount program is not a Medicare prescription drug plan, and is not run by or affiliated with any government program.

People of all ages can get the discount drug card, which the company said can save patients up to 75 percent on certain medications. The Medical Society is promoting the card as a means to help patients who don’t have insurance, or have coverage that doesn’t include prescriptions.

But a health attorney who helps people get care says discounts don’t get to the root of the problem.

"We think a better approach is proactive consumer engagement that identifies why people are uninsured or underinsured," said Bobby Peterson, executive director of ABC for Health. "We know that health coverage program complexity leads far too many people to incorrectly believe that they are not eligible for certain services or programs." Programs like Medicaid, Medicare and subsidies through the Affordable Care Act marketplace.

In addition to the high costs of prescription drugs, another emerging problem is the quality of some insurance products like short term limited duration plans. Baldwin has called them "junk plans" that may cost less but don’t provide adequate coverage.

Both Baldwin and Peterson said there needs to be strong consumer protections to hold insurance and pharmaceutical companies accountable.

"There’s been a lack of transparency and we’ve seen price hike after price hike with no accountability and no justification as far as we can see with the little transparency there is," Baldwin said. "This is a fight we must take on."

A 2008 study published by the National Institutes of Health predicted annual savings of $21.9 billion if the government could negotiate drug prices under Medicare.

But supporters of the current approach believe the secretary of Health and Human Services wouldn’t be able to strike a better deal.

They say competition to attract more Medicare beneficiaries leads to competitive pricing by insurers who negotiate with prescription manufacturers to reduce costs. The Galen Institute, a pro-free market health reform group, says "a judicious use of regulation, genuine market competition, transparency and consumer choice" have made Medicare Part D a success but changes are still needed.