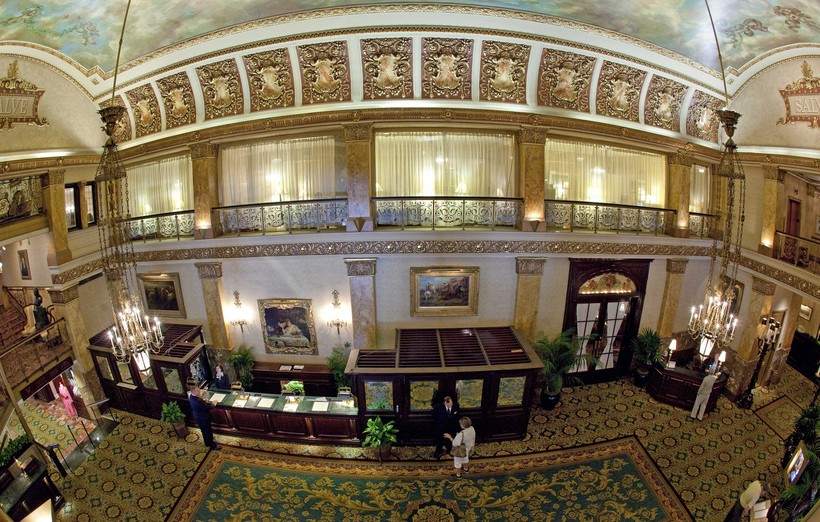 The lobby of the Pfister Hotel in Milwaukee, Wis. Morry Gash/AP Photo

What city lands the 2020 Democratic National Convention is expected to be announced this week. Many say Milwaukee is a favorite, but if it's awarded the bid, one major obstacle could be finding enough hotel rooms to accommodate the expected 50,000 attendees.

Greg Hanis, a hotel industry analyst and president of the New Berlin-based company Hospitality Marketers International Inc., said he was surprised to hear Milwaukee was being considered for the convention.

"When you look at the other cities and the thousands of rooms they have, it is phenomenal, and it will definitely impact the convention and picking Milwaukee," Hanis said. "It would be a feather in its cap if (Milwaukee) could get it, but I just don't see how it could accommodate all these people."

Milwaukee is a finalist, along with Houston and Miami, to host the 2020 convention that runs from July 13 to July 16. The convention is expected to have an economic impact of $200 million to $300 million throughout the state.

Downtown Milwaukee, where the convention would be held, has approximately 5,500 hotel rooms. The metropolitan area has 17,884 rooms, according to STR Inc., a Tennessee-based hotel marketing data firm. That's compared to 91,494 rooms in Houston and 57,282 rooms in Miami.

Alex Lasry, senior vice president of the Milwaukee Bucks — who has been leading the push for the city to host the convention at the newly-opened Fiserv Forum — also declined to comment.

The lack of hotel space in the area means delegates, donors and national media would be driving from as far as Rockford, Illinois, Madison and Green Bay, Hanis said.

"When you go to a conference or a convention, you want to be near the action," Hanis said. "You don’t want to be way out in never, never land or some other city."

There has been a surge in downtown Milwaukee hotel development since 2012. Over the last seven years, there have been at least 1,340 hotel rooms added to the downtown market.

But Hanis said the city is a late bloomer, and many of the rooms are not high-end enough for the delegates and donors who will come to the convention.

"Coming in and getting stuck in a less than average room ... they’re not going to be happy," Hanis said.

When Cleveland hosted the Republican National Convention in July 2016, the city had 200 hotels and 23,656 rooms, according to STR Inc. That’s 5,770 more rooms than the Milwaukee area has. Philadelphia had 389 hotels and 46,490 rooms when it hosted the convention in 2016.

David Gilbert, president and chief executive officer of the Cleveland 2016 host committee for the RNC, said hotels in the seven-county northeast Ohio region averaged 88 percent occupancy during the five nights of the convention.

Hotel occupancy in downtown Cleveland was 99 percent, Gilbert said. More than 90 percent of the 17,000 hotel rooms contracted by the RNC host committee were within a 35-mile radius of the Quicken Loans Arena where the convention took place, Gilbert said.

"Airbnb provided much-needed capacity with guest night bookings increasing more than 300 percent compared with the two weeks prior and following the convention," Gilbert said in a written statement.

DNC Chairman Tom Perez reportedly has ties to Wisconsin and many believe he may want to appeal to Bucks owner Marc Lasry, a billionaire and Democrat.

During an interview with NBC News, Karen Carter Peterson, a vice chair of the DNC and the chair of the Louisiana Democratic Party, said she has told Perez her primary concern is the experience of the delegates.

"It needs to be convenient for them to move around and hit five or six breakfasts in a two-hour span," Carter Peterson told NBC News. "If the hotels are 15, 25 miles apart, it makes it less likely."