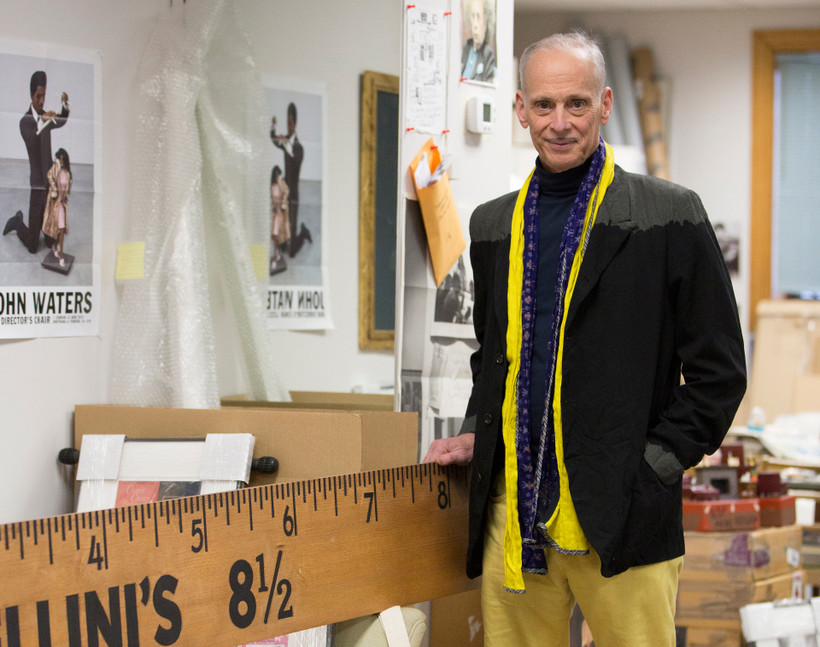 Legendary Cult Director Has Major Retrospective Of His Visual Art In Baltimore
By Doug Gordon
Share:

John Waters has been called all kinds of names throughout his career: "Pope of Trash" and "Prince of Puke" included. That’s because he is famous, and infamous, for his transgressive cult films. Movies like "Multiple Maniacs," "Pink Flamingos," and "Female Trouble."

But Waters is also an artist.

The Baltimore Museum of Art is hosting a major retrospective for its local boy who’s made good. Or bad. Or both. It’s called "Indecent Exposure" and features Waters' art including photographs, sculptures and videos that he has made since the early 1990s.

The exhibition includes some of Waters' earliest visual art like "My Little Movies." These are small photographic prints arranged in specific sequences. Waters took photographs with film of images that were playing on television in real time, without stopping or freeze-framing the TV.

"It's like a snipe hunt," Waters explained. "I think up the narrative of each piece before I ever do them. So I guess you could call it the dreaded conceptual art. And then I have to find the images for each thing to be able to tell the story. Sometimes it doesn't work and I take those images and I keep them. I have many, many little envelopes of different subject matters or backgrounds. And then I write with them and I edit with them, with those pictures to tell a new story. So something I took that didn't work might end up, you know, 10 years later in another sequence that I'm using to tell another story."

An example of John Waters' "My Little Movies" works is called "Facelift."

"There's a movie where Elizabeth Taylor gets a facelift and her stitches kind of look like my mustache, I noticed," Waters said. "So I edited back and forth like so it's Elizabeth Taylor, me. And then I turn into her and get a facelift and she has my mustache. So it's kind of morphing other images into a completely different narrative than there was in the original movie."

Waters enjoys the solitary practice of creative visual art and finds that it presents a different creative challenge than collaborating with others to make his movies.

"It's very different. I was trying to tell a story in a quicker way. Talk about the high concept. You know, it's like two frames. That's it. But it's also something that you're going to look at forever if you have it hanging in your house. So it's very different from even a cult movie. People might have seen it 10 times. They don't look at it every single day of their lives when they look up from their bed," Waters said. "So I tried to imagine that too — pieces that wouldn't always be something that people would want to hang over their sofa. Because my collectors, they understand that I'm satirizing the whole art business in the first place."

When exploring different mediums, Waters draws a distinct boundary between his film career and his visual art career.

"It's different because in the art world, the only obscenity left is celebrity. And I hate celebrity artists, so basically I try to debase that and ruin my celebrity. But at the same time, I've never given an article in like say 'People' Magazine or something, where I routinely do, you know, press for the movies ... I like to keep them very, very separate," he said. "Many people that are fans of my movies probably don't even know that I have that, even though there are four art books out about my work. I guess it gets less and less like that. But still, I like to keep it separate because I think it is a very separate thing. I think it up in a whole different place. I still collect art, I still go to art galleries all the time, and it's just as important to me. But it's different."

All images provided by John Waters and the Baltimore Museum of Art.