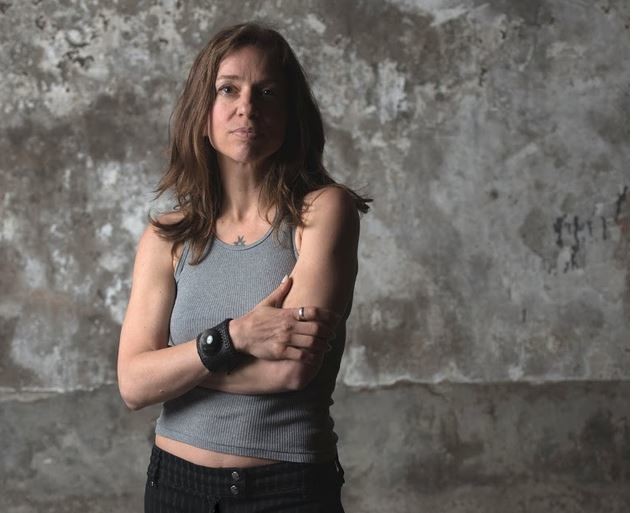 Indie-folk siren Ani DiFranco has joined dozens of other performers to contribute to an online songwriting protest against the flying of the Confederate battle flag in the wake of a shooting rampage at a historic black church in South Carolina last month.

The song, "Take Down Your Flag," was initially penned by singer-songwriter Peter Mulvey, of Milwaukee, after nine African-Americans where shot and killed at the Emanuel African Methodist Episcopal Church in downtown Charleston on June 17. The church's history as focal point for the community, its place in the history of the civil rights movement and several online photos of the shooting suspect posing with flags and symbols linked to white supremacy has fostered the theory that the shooting was racially motivated.

According to various media reports, Mulvey began writing the protest song in the days immediately after the shooting while he was engaged in opening-act duties for DiFranco in Massachusetts. After hastily performing the song live for the first time, he uploaded a version to YouTube and as others asked to perform it, he encouraged musicians to add new verses and post their renditions on social media.

The effort has drawn more than 200 contributors to a YouTube playlist, including famous names like actor Jeff Daniels, Peter Yarrow (of Peter, Paul and Mary), blues player Keb' Mo' and Paula Cole.

On Wednesday, DiFranco posted a video and a link to her own recording of the song on her official website. DiFranco recorded the song with singer-keyboardist Ivan Neville (son of soul legend Aaron Neville of the Neville Brothers and former member of Keith Richards' '80s solo band, the X-Pensive Winos) and jam-band drummer Terence Higgins.

The song rails against the prominence of place given the Confederate flag (particularly at South Carolina's Statehouse in Columbia). While many supporters say the flag is a mark of Southern heritage, opponents say it's a stark reminder of the region's legacy of slavery, racial hatred and injustice. However, Mulvey's version of the song quickly moved from attacking the symbolism to the perceived consequences, with his second verse shifting to talk about one of the shooting's victims.

DiFranco's release comes just as many opponents of the flag are likely declaring victory. Both chambers of the South Carolina state Legislature voted this week to remove the flag from the Statehouse. Gov. Nikki Haley is expected to sign the bill into law on Thursday afternoon and the flag will be removed from state grounds within 24 hours.

An mp3 download of the song can be purchased from DiFranco's record label, Righteous Babe. According to a statement on DiFranco's site, all proceeds from the downloads will be donated to the Emanuel Hope Fund, which directly supports the funeral and burial expenses for the shooting victims and the church.

​As a preview, here's DiFranco, Neville and Higgins' version of the song:

Mulvey has also begun to organize an online benefit concert for the Emanuel A.M.E. Church, slated for July 12.

Editor's Note: Special thanks to Anne Strainchamps for the tip.