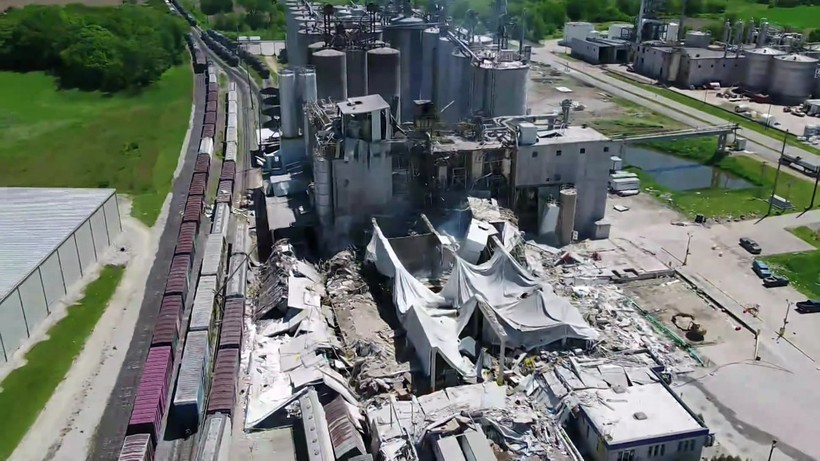 The Didion Milling, Inc. plant in Cambria, Wisc. after the fatal May 2017 explosion. Photo courtesy of CBS 58

A Sun Prairie milling company was charged with federal crimes Thursday for violating safety rules for years and covering up the violations, the Wisconsin State Journal reported.

Didion Milling, Inc. failed to regularly clean up combustible corn dust, leading to a May 2017 explosion that killed five workers and injured 15 more at a mill in Cambria. According to the indictment, the initial explosion spread and caused more explosions because of accumulated dust in several areas of the plant.

The company has been charged with nine crimes, including fraud, conspiracy and two counts of willful safety violations, causing death. The Cambria plant also falsified records to make it look as if the cleanings were completed, The Associated Press reported. Penalties could include a $10,000 fine and up to six months in prison, but that could be longer if a judge decides to stack the sentences.

Didion officials issued a statement saying the explosion was an accident and that they were disappointed the federal government decided to pursue "unwarranted charges."

Wisconsin Public Radio previously reported the plant had been cited before the 2017 explosion. Records from the U.S. Occupational Safety and Health Administration showed Didion was cited in January 2011 for exposing workers to hazards associated with dust and other fire hazards.

There have also been violations since the 2017 explosion. In March 2020, a contractor was seriously injured after falling 30 feet from a catwalk while cleaning a grain bin. In December 2020, a worker was found dead inside a silo.