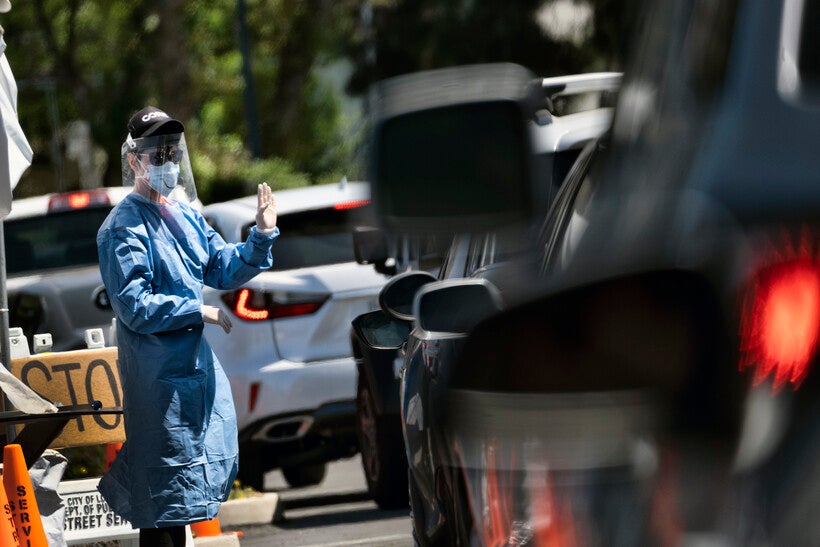 A CORE (Community Organized Relief Effort) volunteer checking appointments and directing cars lining up for coronavirus testing in the Woodland Hills section of Los Angeles on Saturday, May 2, 2020. The city of Los Angeles will offer free coronavirus testing to all residents regardless of whether they have symptoms. Until now tests were reserved for those with symptoms and frontline employees like health care and grocery store workers. Richard Vogel/AP Photo

398 People Have Died From The New Coronavirus In Wisconsin So Far
By WPR Staff
Share:

There are 9,939 positive cases of COVID-19 in Wisconsin as of Saturday, according to the state Department of Health Services. That's an increase of 349 cases from the day before.

According to health officials, 398 people in Wisconsin have died from COVID-19 as of Saturday afternoon.

DHS reported 101,935 negative tests for the new coronavirus, an increase of 4,670 from Friday to Saturday.

As of Friday afternoon, Wisconsin has 51 labs performing COVID-19 tests, up from eight labs in March. According to DHS, they're able to process 13,797 samples per day — more than the state's goal of completing about 12,000 tests per day.

The following counties have no confirmed cases as of Friday afternoon: Burnett, Langlade, Pepin and Taylor.