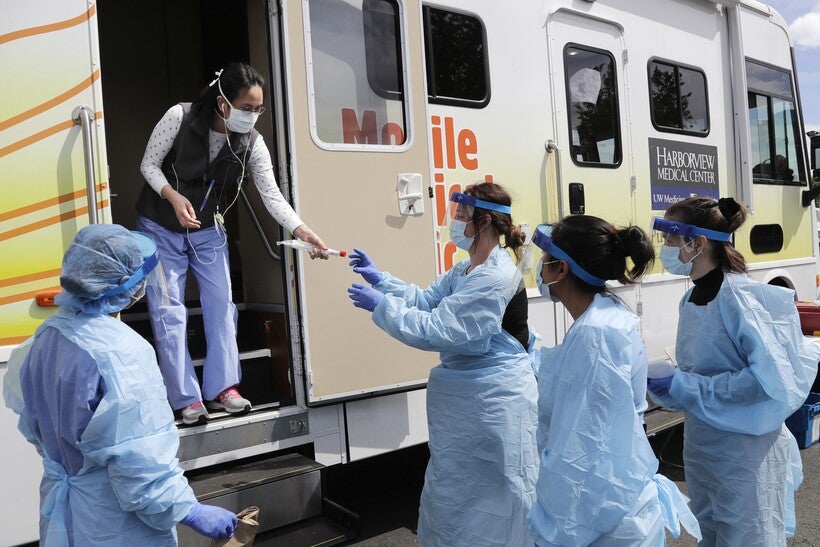 Medical assistants wait to be handed testing kits at a drive-up coronavirus testing site Wednesday, April 29, 2020, in Seattle. The site, open Wednesdays and Saturdays from 10 a.m. to 3 p.m. in the Rainier Beach neighborhood, is available to anyone displaying the virus symptoms, are pregnant, over 60 or have a chronic condition, as well as health care workers and first responders. Elaine Thompson/AP Photo

327 People Have Died From The New Coronavirus In Wisconsin So Far
By WPR Staff
Share:

There are 7,314 positive cases of COVID-19 in Wisconsin, the state Department of Health Services announced Friday. That's an increase of 460 cases from the day before.

The state has increased its testing capacity.

A key metric outlined in Gov. Tony Evers' "Badger Bounce Back" plan is for the percentage of positive cases to be in decline over a 14-day period. According to state data, 10.8 percent of tests were positive on Thursday, and 12.7 percent were positive on Friday. A screenshot of a graph from the Wisconsin Department of Health Services on Friday, May 1, 2020, that shows the percent of people tested for COVID-19 who had positive results by day in the last 14 days.

According to figures from DHS, 327 people in Wisconsin have died from COVID-19 as of Friday afternoon.

Brown County has seen a surge in positive tests after health officials traced hundreds of cases to meatpacking facilities there. As of Friday afternoon, Brown County had 1,175 positive cases of the new coronavirus — an increase of 118 cases from Thursday.

As of Friday afternoon, Wisconsin has 50 labs performing COVID-19 tests, up from eight labs in March. According to DHS, they're able to process 11,047 samples per day. The state has a goal of completing about 12,000 tests per day, DHS Secretary Andrea Palm said Monday.

According to a press release, the State Emergency Operations Center, DHS, Wisconsin Emergency Management and Wisconsin National Guard are working with local health departments to hold community testing events in places with a known lack of access to testing or where additional testing is needed. Drive-thru testing is available Friday at the Buffalo County Highway stop in Alma, and more testing sites will be announced in the coming days.

There are confirmed cases in 67 of Wisconsin's 72 counties. Lincoln County reported its first positive case Friday.

The following counties have no confirmed cases as of Friday afternoon: Burnett, Forest, Langlade, Pepin and Taylor.