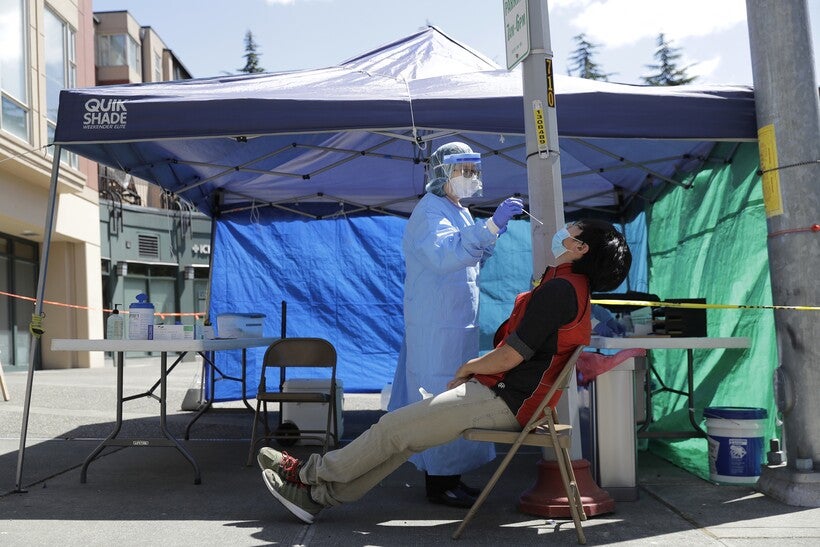 In this May 15, 2020, photo, Tina Nguyen, left, a nurse at the International Community Health Services clinic in Seattle's International District, takes a nose swab sample from Mike Wong, an ICHS employee, during walk- and drive-up testing for COVID-19, in Seattle. On Saturday, May 16, 2020, officials reported that Washington state had reached the grim milestone of 1,000 deaths from the coronavirus. Ted S. Warren/AP Photo

There are 16,462 positive cases of COVID-19 in Wisconsin as of Wednesday, according to the state Department of Health Services. That's an increase of 599 cases from the day before, the largest single-day increase in positive cases since the pandemic began.

According to health officials, 539 people in Wisconsin have died from COVID-19 as of Wednesday afternoon.

DHS reported 210, 605 negative tests for the new coronavirus, an increase of 9,731 from Tuesday to Wednesday. The number of tests administered in Wisconsin topped 10,000 for the first time Wednesday according to DHS Secretary Andrea Palm.

As of Wednesday, 59 percent of people who have tested positive for COVID-19 have recovered, according to DHS.

Wisconsin's daily testing capacity has grown from 120 available lab tests in early March to 14,253 as of Wednesday. The surge in new tests is one reason for the increase in positive cases. The percentage of positive tests was 5.8 percent Wednesday, rising from 3.6 percent Tuesday. On Monday it was 4.1 percent.

Gov. Tony Evers plans to spend $1 billion in federal funds to combat COVID-19 in Wisconsin. The money will be used to pay for contact tracing, ongoing efforts to test people for the virus, and preparing for a potential surge. Wednesday, Evers announced the $200 million "Routes to Recovery" grant program, funded by the federal coronavirus relief bill and aimed at helping local governments address urgent needs. Evers said $10 million of that will go to Wisconsin's tribal nations, with the remainder distributed among county, city, village and town governments.

"They know what they need and how best to address to the recovery needs of their friends, families and neighbors," Evers said Wednesday on a call with reporters.

Evers' "Badger Bounce Back" plan no longer has the force of law following a state Supreme Court ruling, but the state's dashboard for the reopening plan shows Wisconsin has met key gating criteria, including 95 percent of hospitals being able to treat all patients without crisis standards of care and 95 percent of hospitals claiming they have arranged to test all symptomatic staff treating patients. The state has also seen a downward trajectory of COVID-like illnesses reported within a 14-day period.